Because of the town’s function as a military depot, the people of Kingston found their businesses burgeoning and booming overnight. As hotels and supply stores multiplied rapidly, Kingston’s economic prosperity immediately rocketed.

As United Empire Loyalists, the Fairfields were a prominent family in Kingston at the time of the war. The household included William Fairfield, and his six sons and six daughters. Their extensive list of records includes financial records, legal documents, correspondences, council minutes and militia papers. Their letters during the war describes their involvement in the cattle industry. 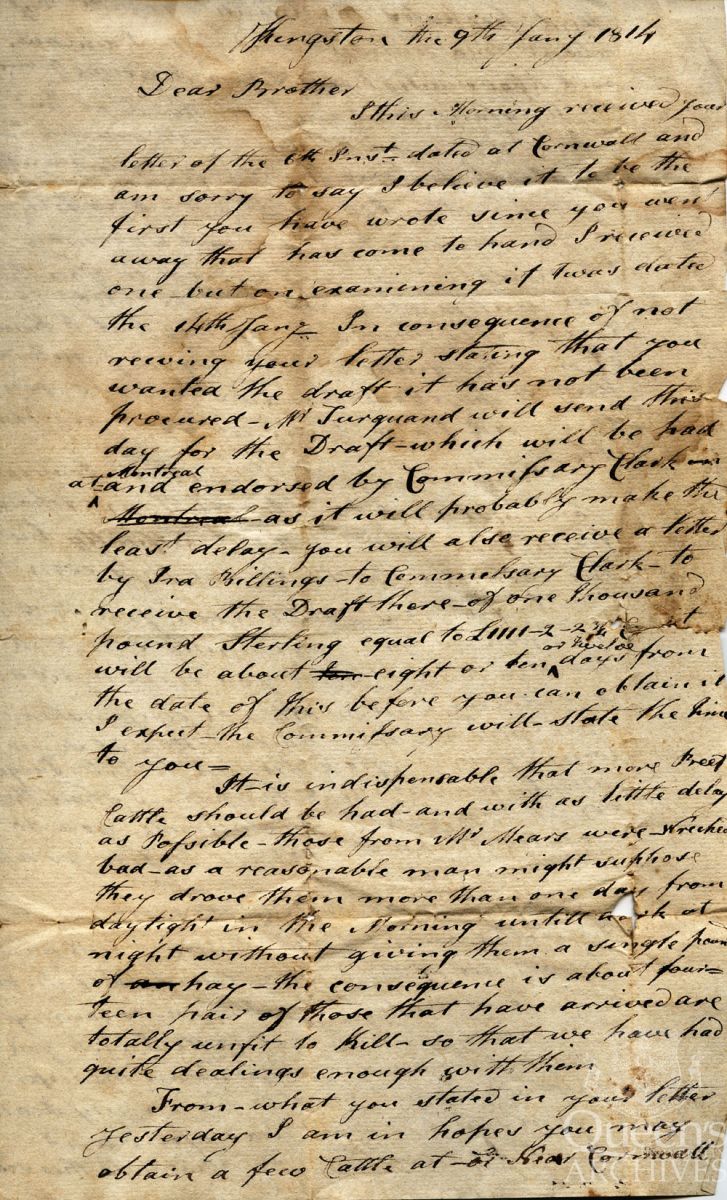 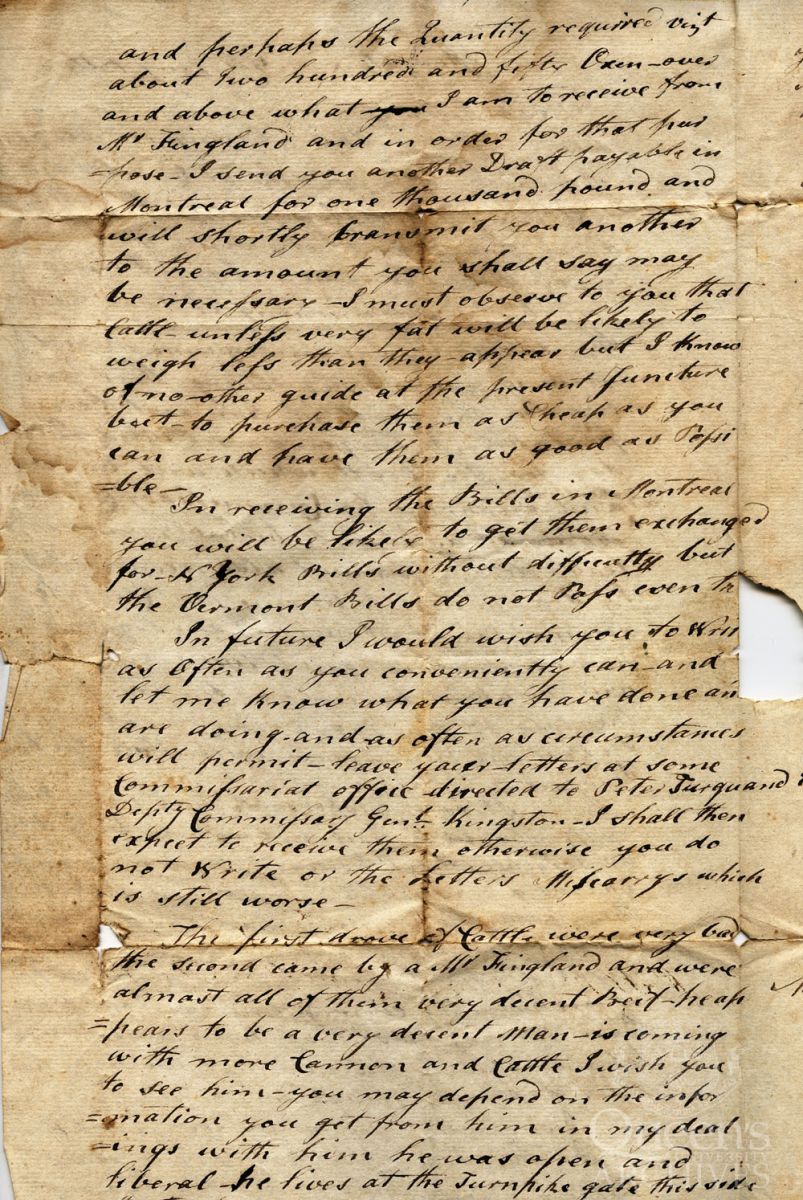 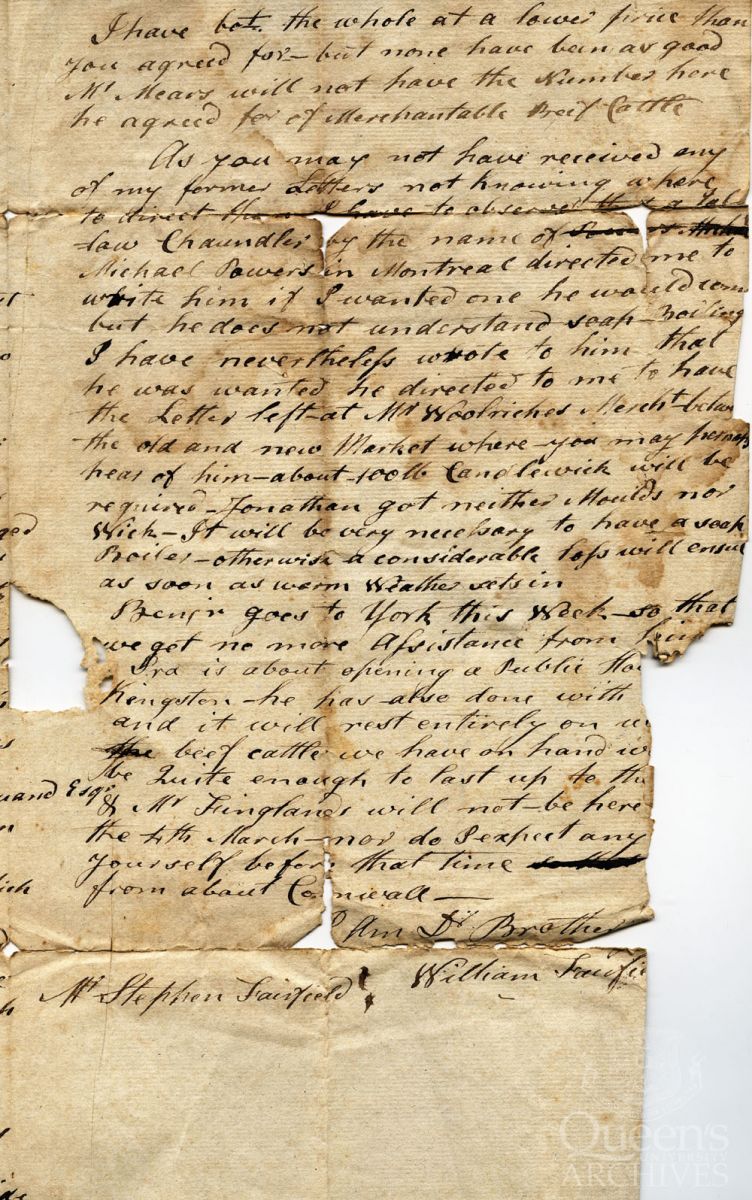 On January 9, 1814, William Fairfield writes to his brother, Stephen Fairfield about the transportation of their cattle. He asserts,

It is indispensable that move… cattle should be had and with as little delay as possible – those from McMears were wrecked bad – as a reasonable man might suppose they drove them more than one day from daylight in the morning until dark at night without giving them a single pound of hay – The consequence is about fourteen paid of those that have arrived are totally unfit to kill, so that we have had quite dealings enough with them... From what you state in your letter yesterday I am in hopes you may obtain a few cattle…near Cornwall. 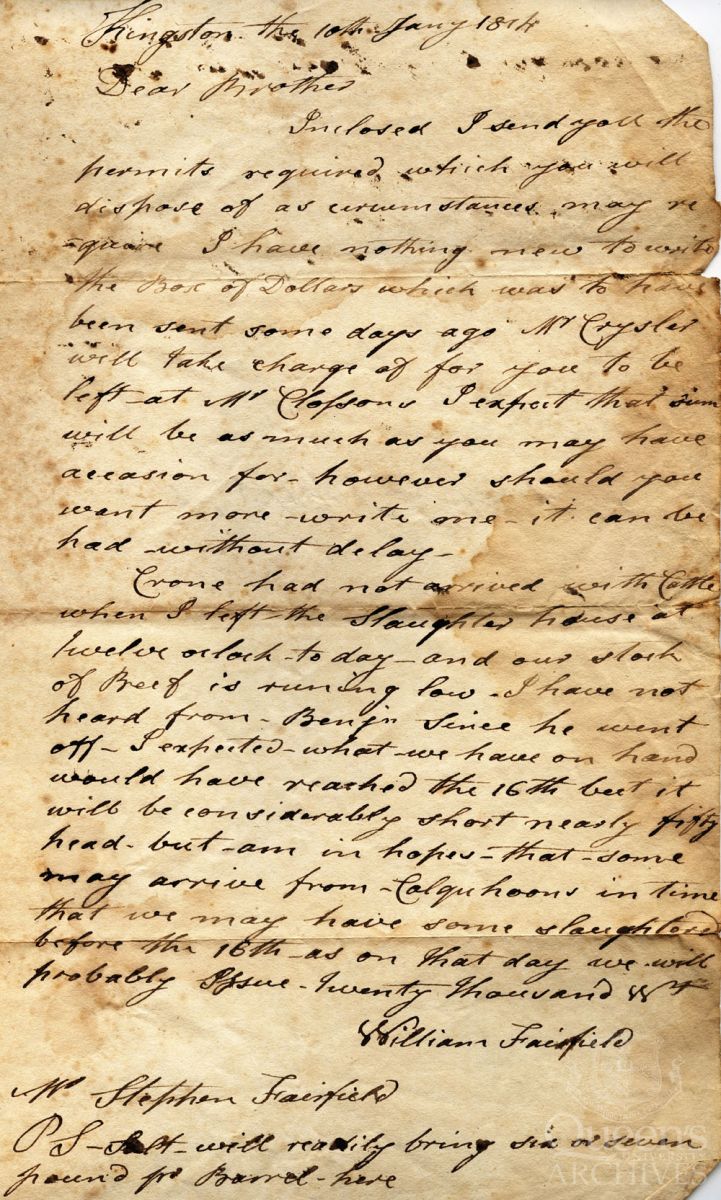 Inclosed I send you the permits required which you will dispose of as circumstances may require... Crone had not arrived with Cattle when I left the Slaughter house at twelve o’clock today and out stash of Beef is running low 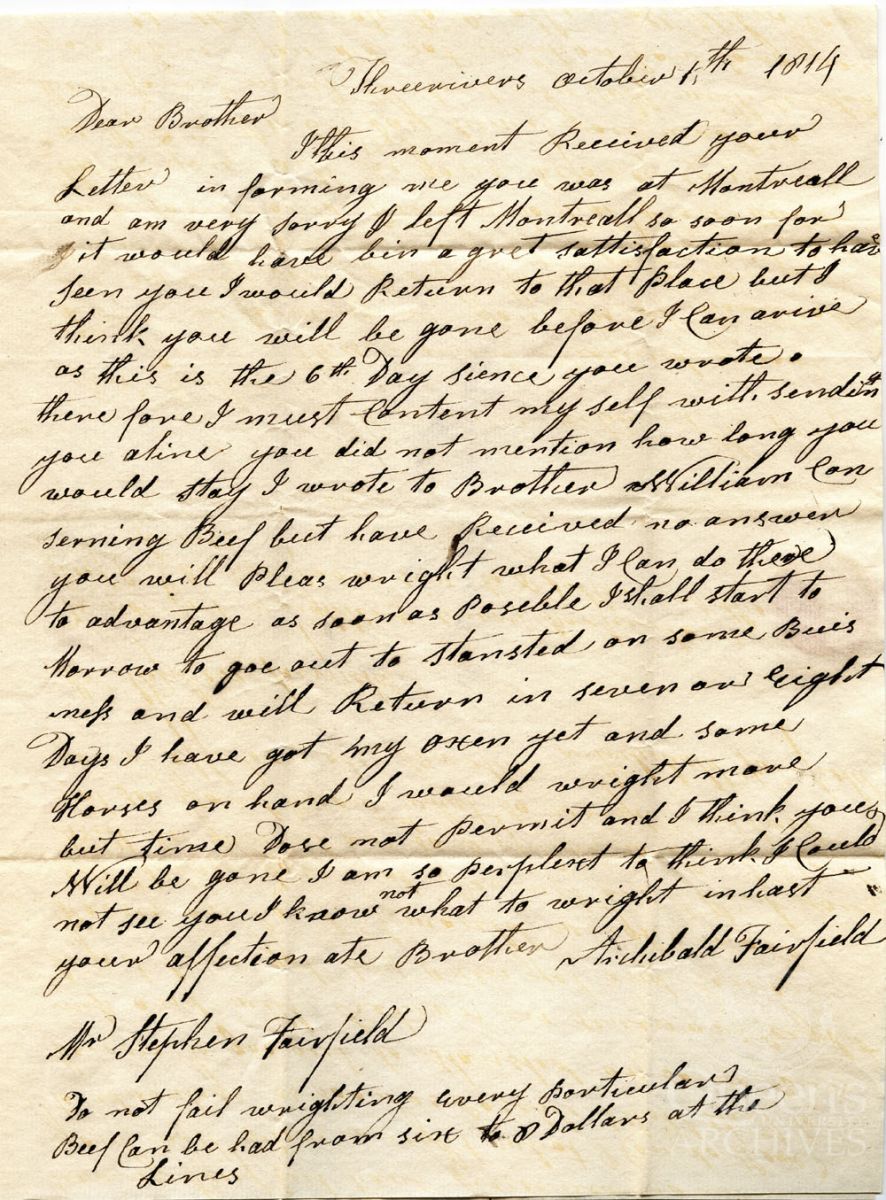 In October 1814, Archibald Fairfield contacts Stephen Fairfield, mentioning that he “wrote to Brother William concerning Beef but Received no answer." 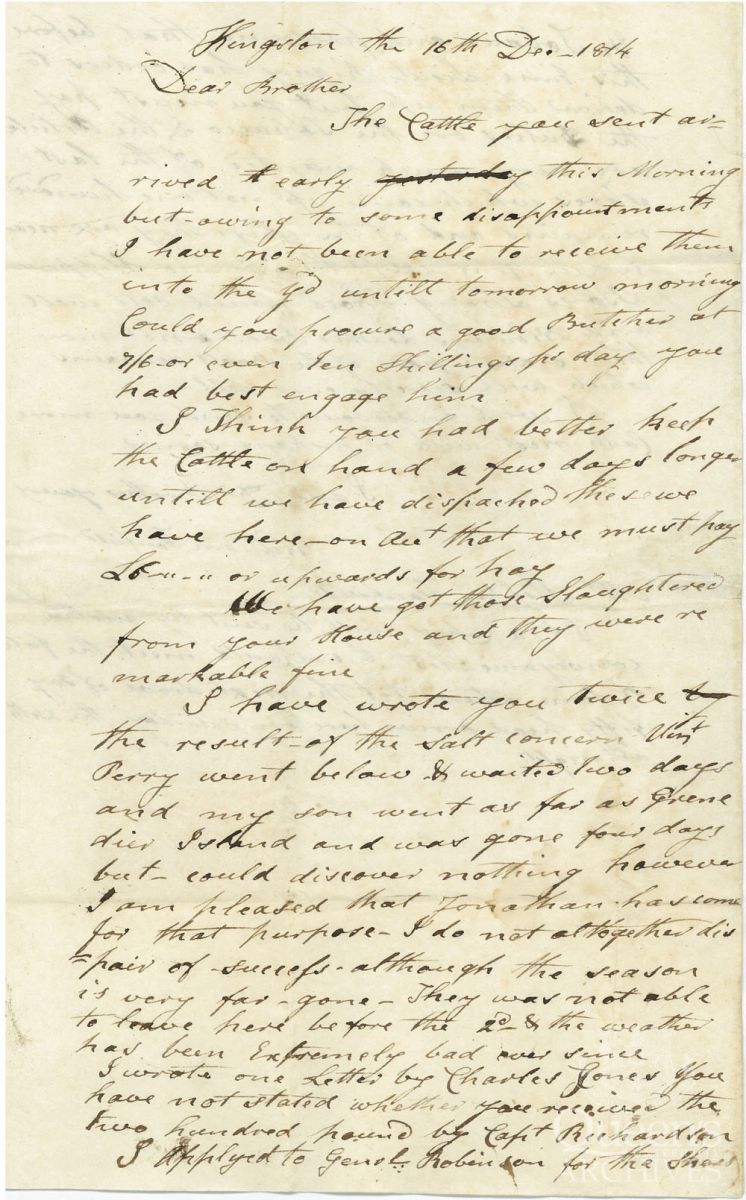 On December 16, 1814, William Fairfield writes to Stephen Fairfield about the quality of the sent cattle. He says,

The Cattle you sent arrived early this Morning but owing to some disappointments. I have not been able to receive them into the yd until tomorrow morning... I think you had better keep the Cattle on hand a few days longer until we have dispatched these. 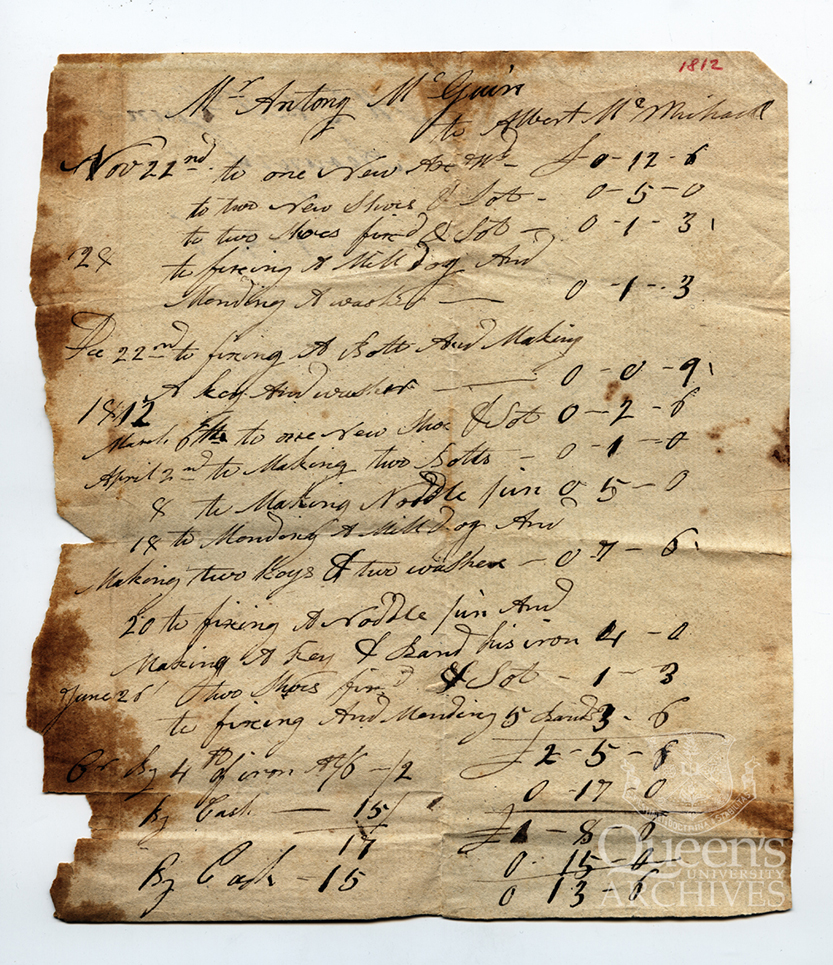 Although treasonous, certain Canadian families including the Fairfields were involved in businesses with the Americans, their supposed enemies. In the collection of McGuin Family records, there is an invoice detailing the charges for services between certain Americans and the McGuins. The account marked the making and fixing of certain items in November 1812.

As commandant of the Midland District, the Honourable Richard Cartwright recorded the fiscal details concerning the war. His letter books, composed between August 16, 1810 and May 1815, reveal the wide-ranging list of bills entailed in the war. 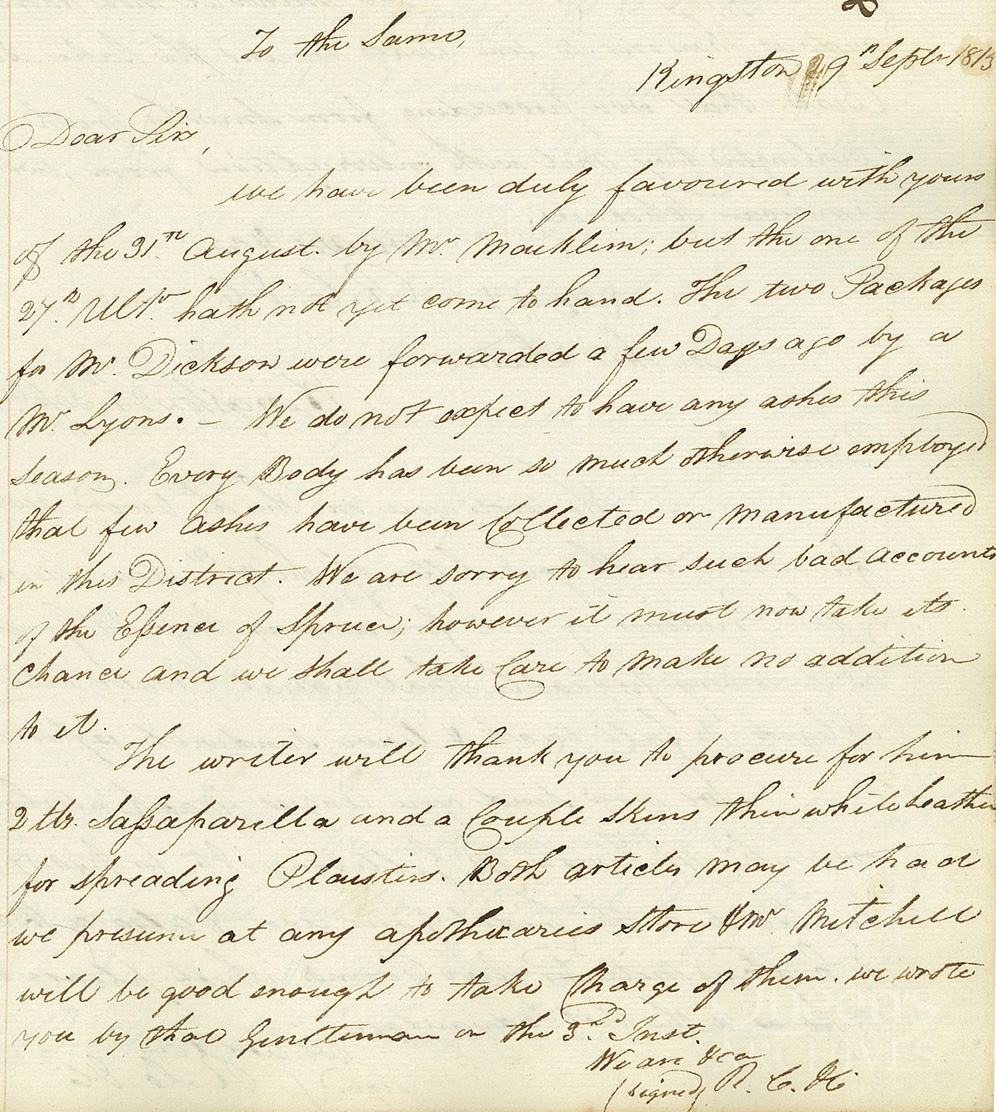 We do not expect to have any ashes this season. Every Body has been so much otherwise employed that few ashes have been collected or manufactured in the District. 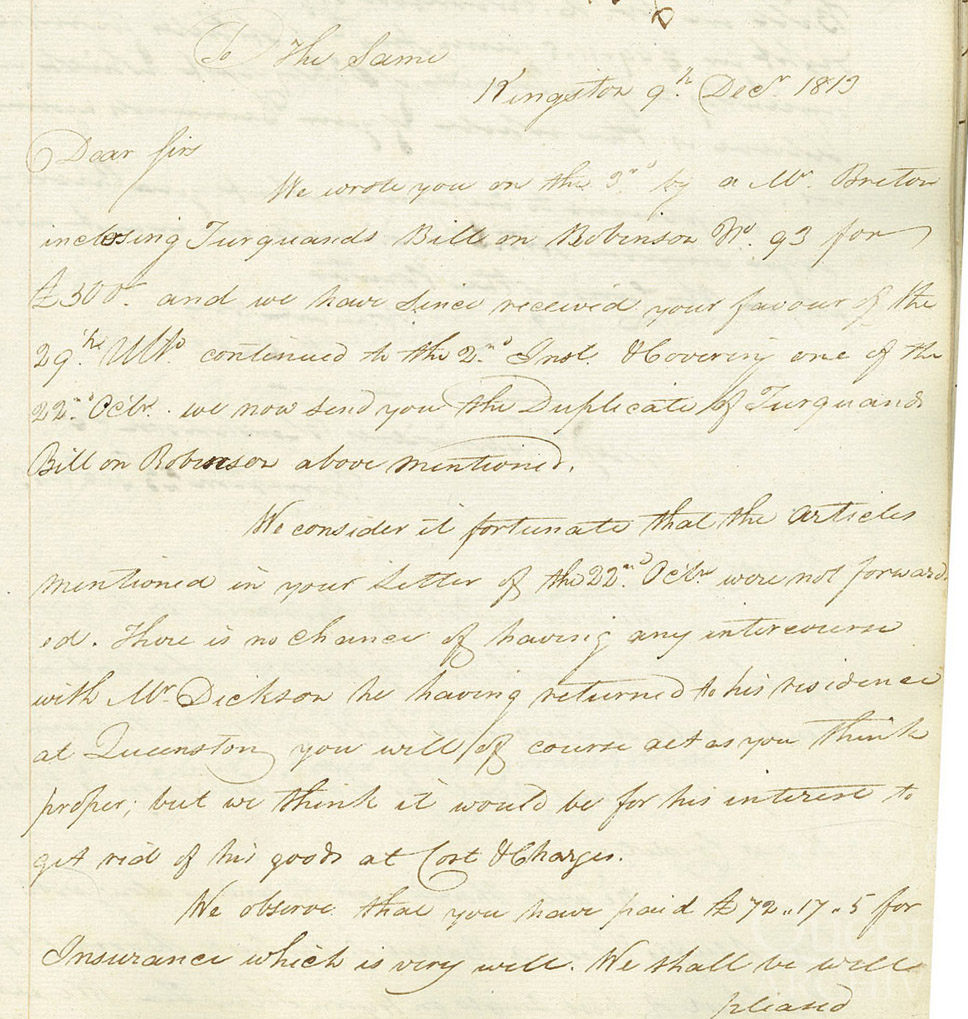 We observe that you have paid £ 72..17..5 for Insurance which is very well. We shall be… pleased to receive the Acot. sales from London when opportunity offer and we trust they will be accompanied with the Amt. of Insurance paid on ashed shipped to Liverpool in 1812.

Inclosed we send you in Army Bills the Balance of your amount is being nine Pounds twelve shillings which we trust will reach you safe.

On January 18, 1815, Cartwright one again discusses about army bills, saying,

I avail myself of this favourable opportunity to in close you a parcel and Army Bills to the amount of one thousand nine hundred fifty four Army Bills exclusive of interest.

On May 10, 1815, he reveals that there is a problem with counterfeit bills circulating around town. He divulges,

But the matter with counterfeit bills is a more serious matter. They are the first of the kind I have yet met with and from any thing in their appearance, I should be still at a loss to distinguish them from the time. 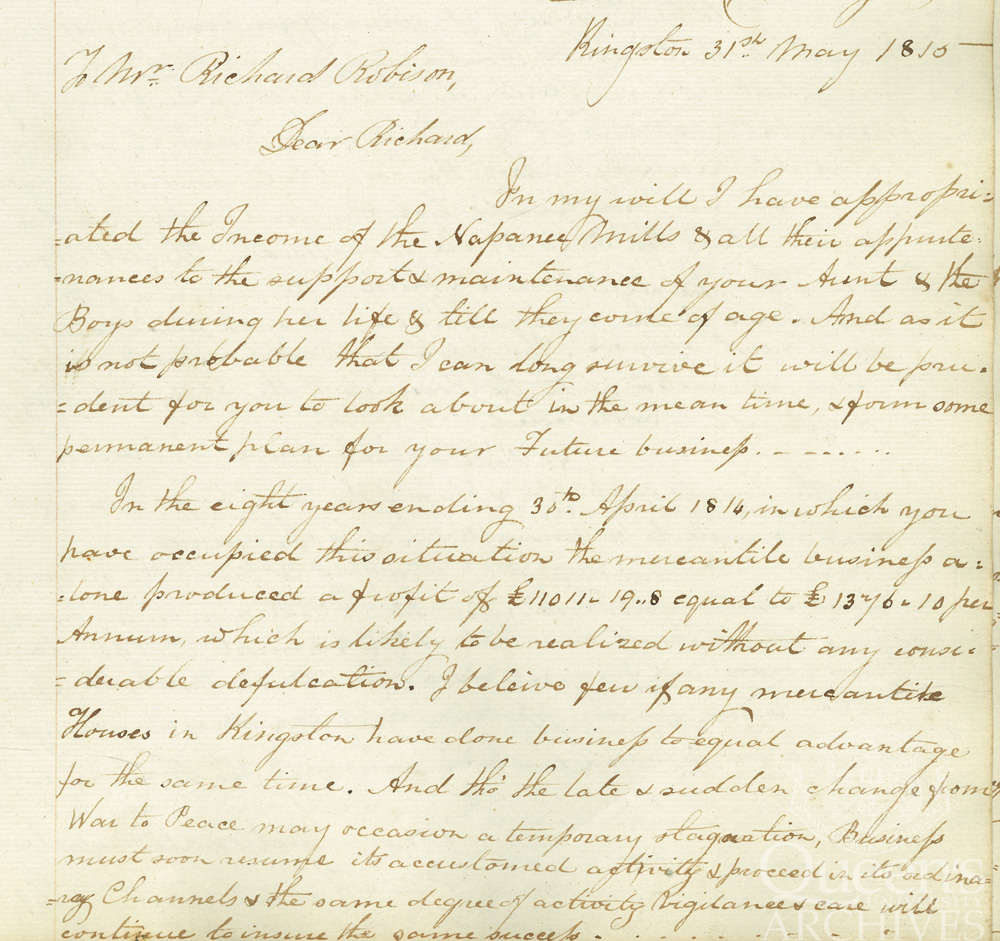 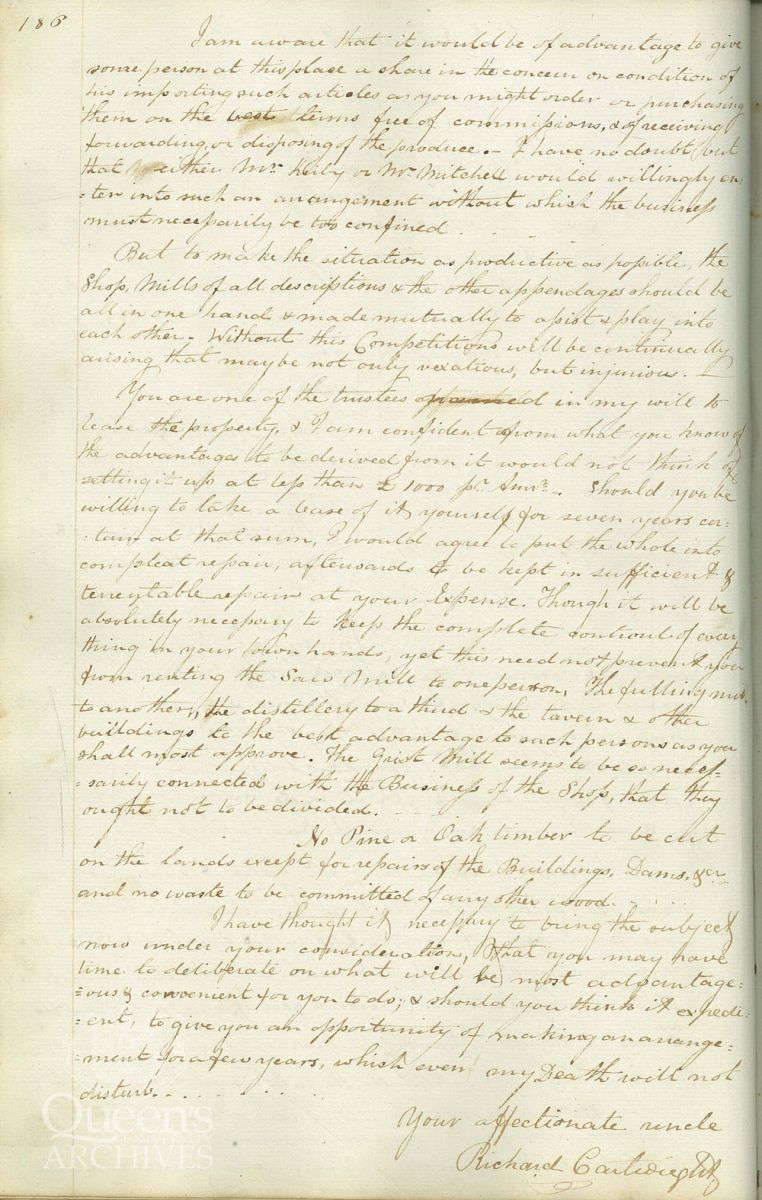 Months after the declaration of peace, on May 31, 1815, Cartwright’s letter to Richard Robison demonstrates how Kingston had changed over the past three years. Within a short period, the town had boomed from a small village to hustling and bustling town.

I believe a few, if any, mercantile houses in Kingston have done business to equal advantage for the same time. And tho’ the late and sudden change from War to Peace may occasion a temporary stagnation, business must soon resume its accustomed activity and proceed in its ordinary channels and the same degree of activity, vigilance and care will continue to insure the same success.

Cartwright was not the only one who noticed Kingston’s sudden prosperity. Recording local event from February 1814 to the end of war, Thomas Mossington catalogued in his journal not only a listing of H.M.’s Ships and Vessels on Lake Ontario, but also the rise in prices of certain supplies. 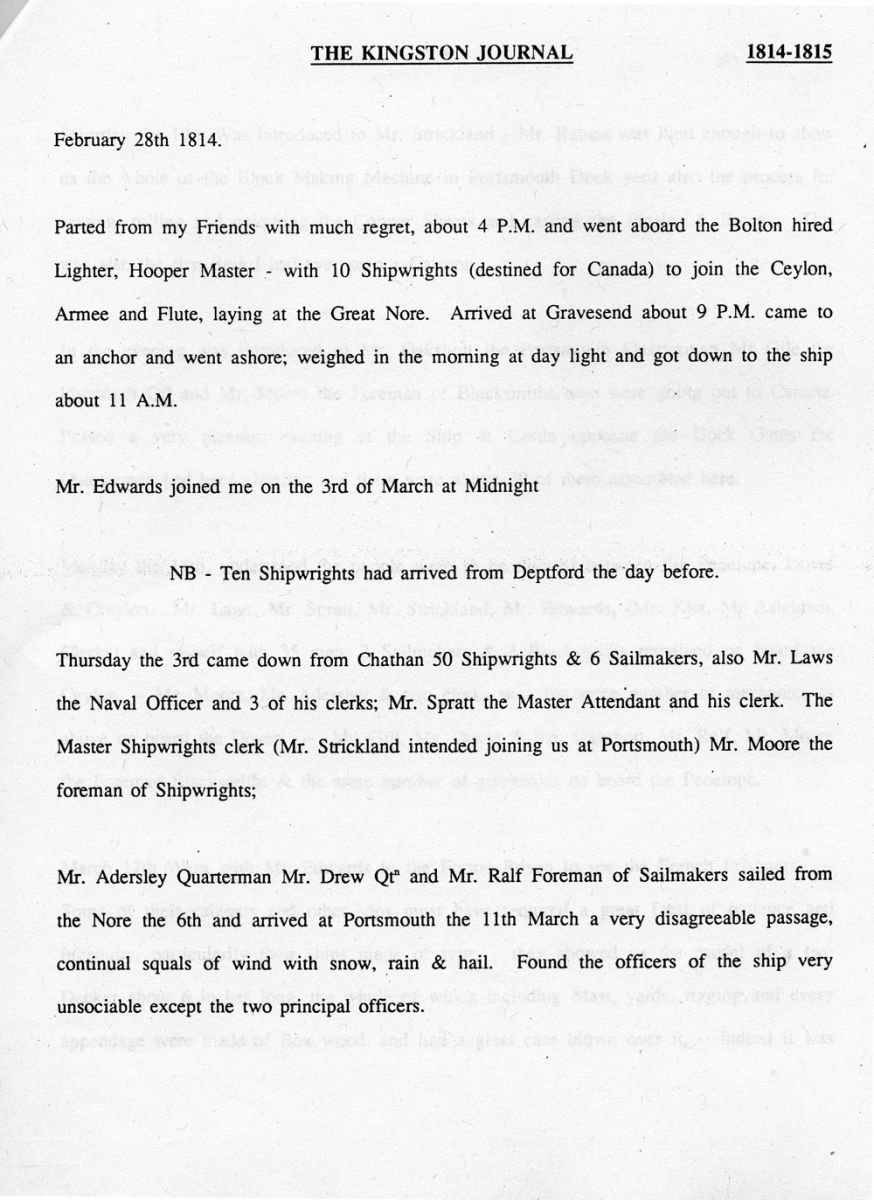 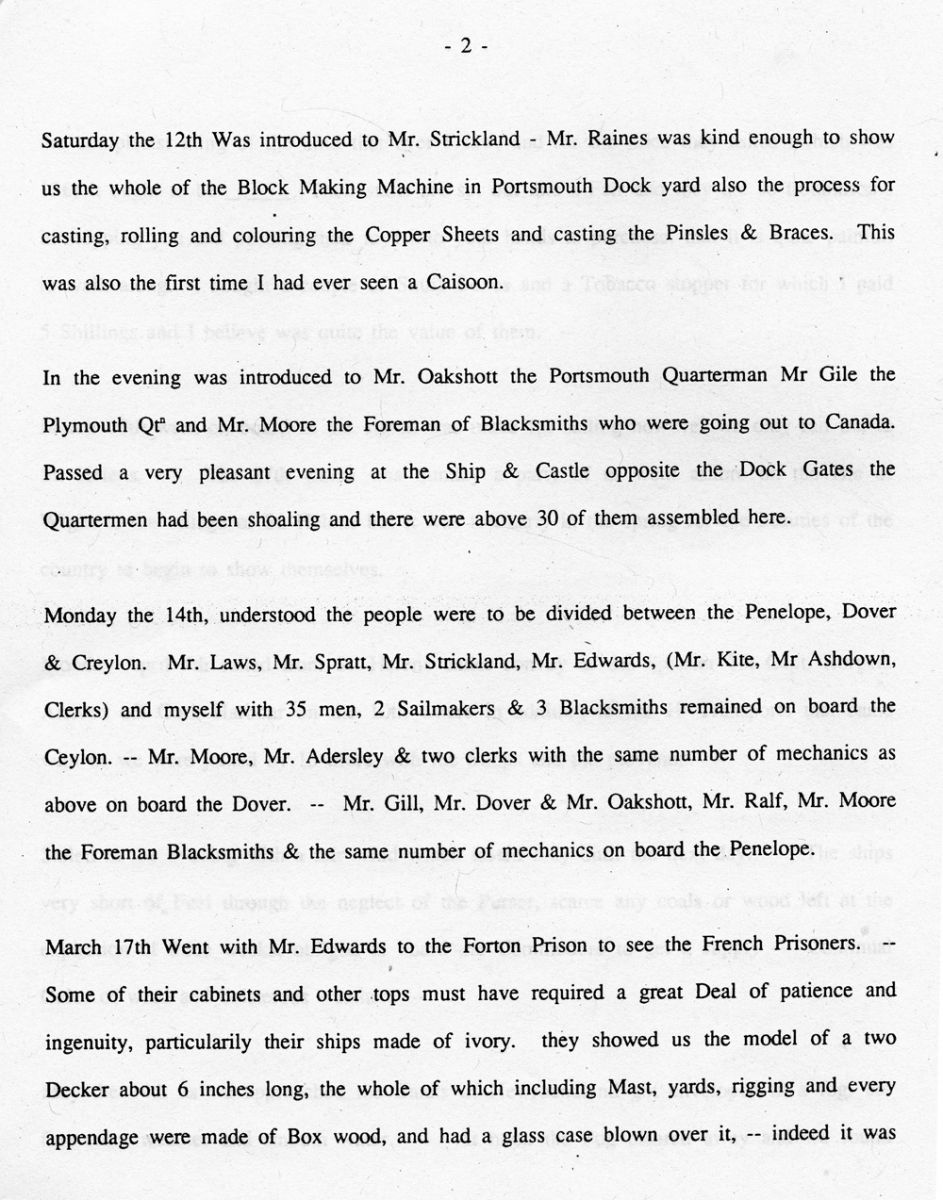 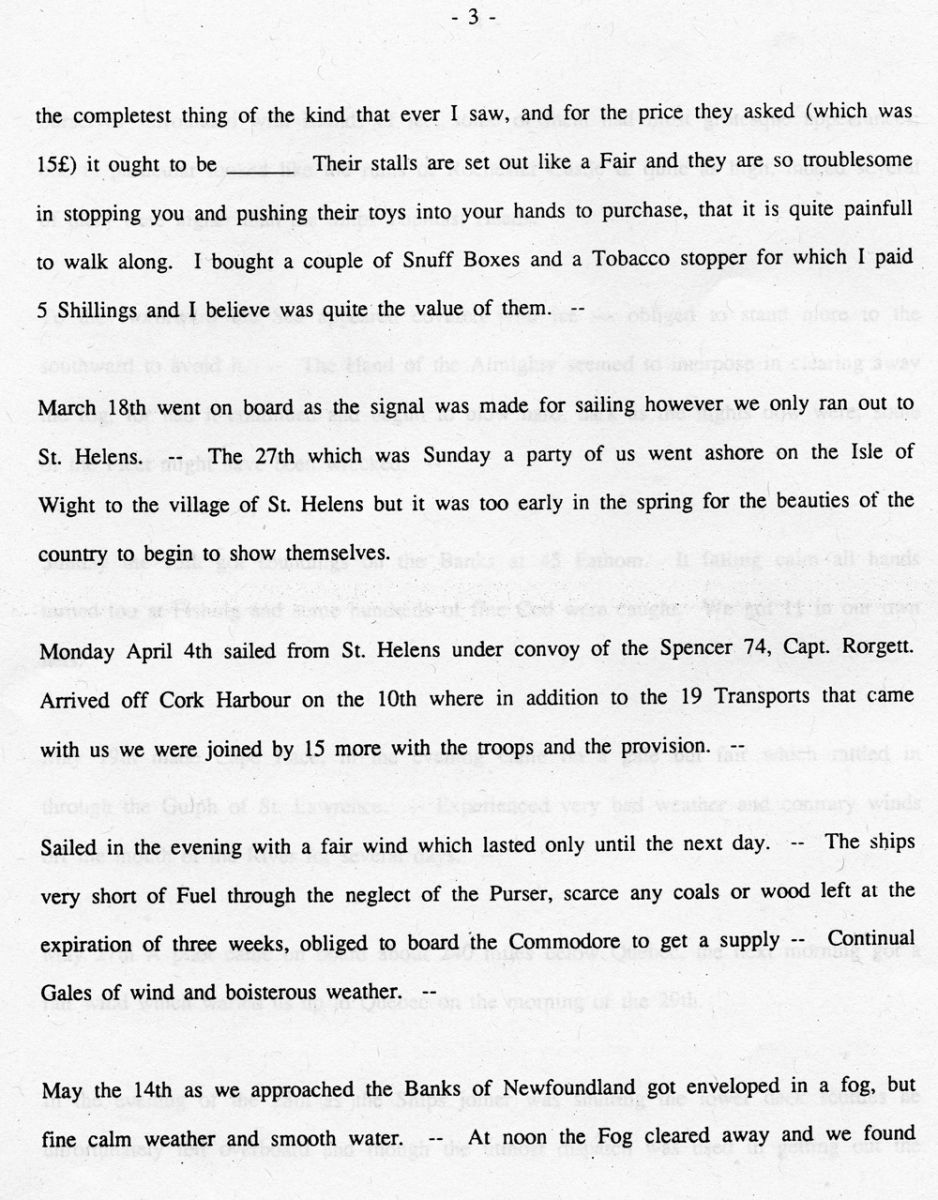 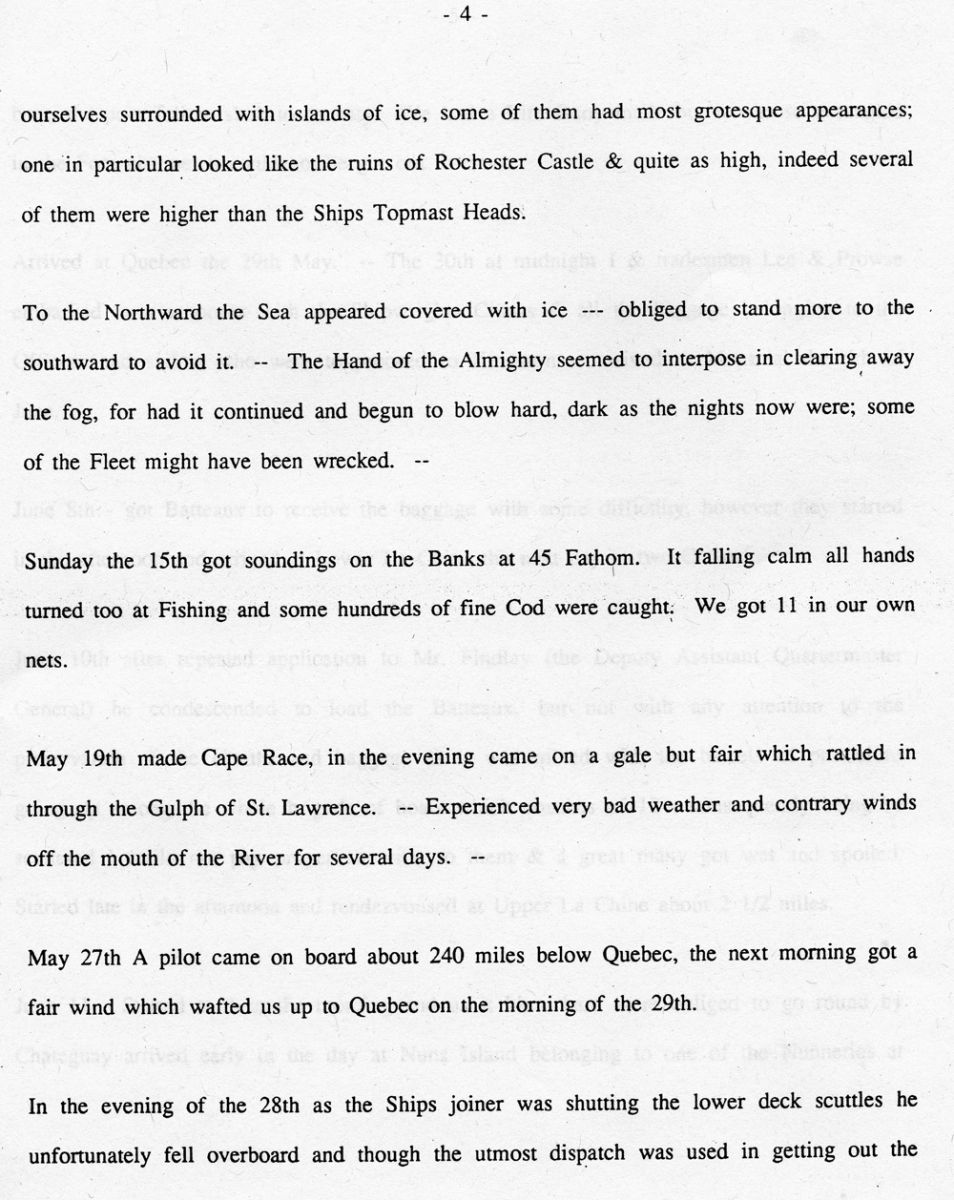 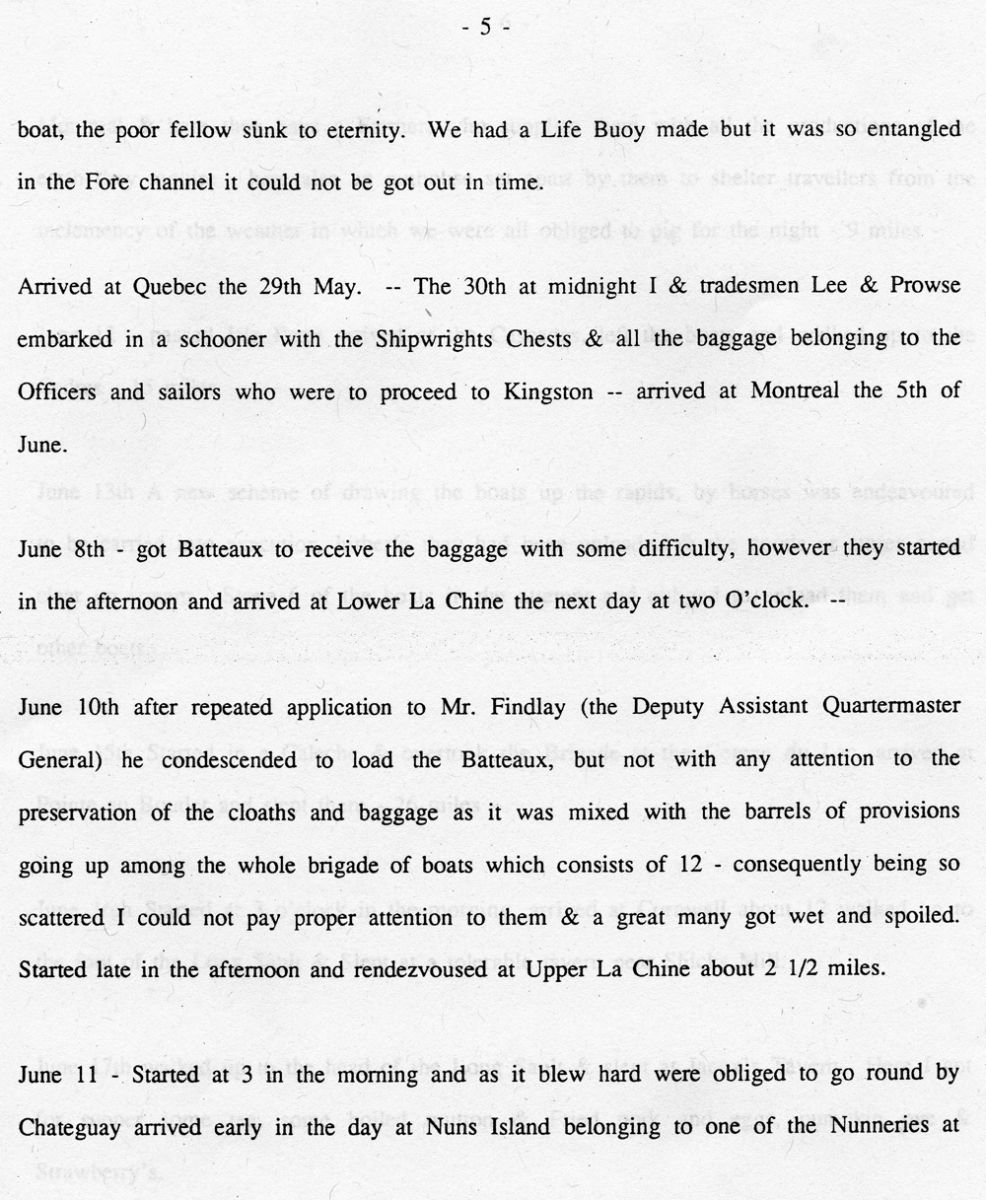 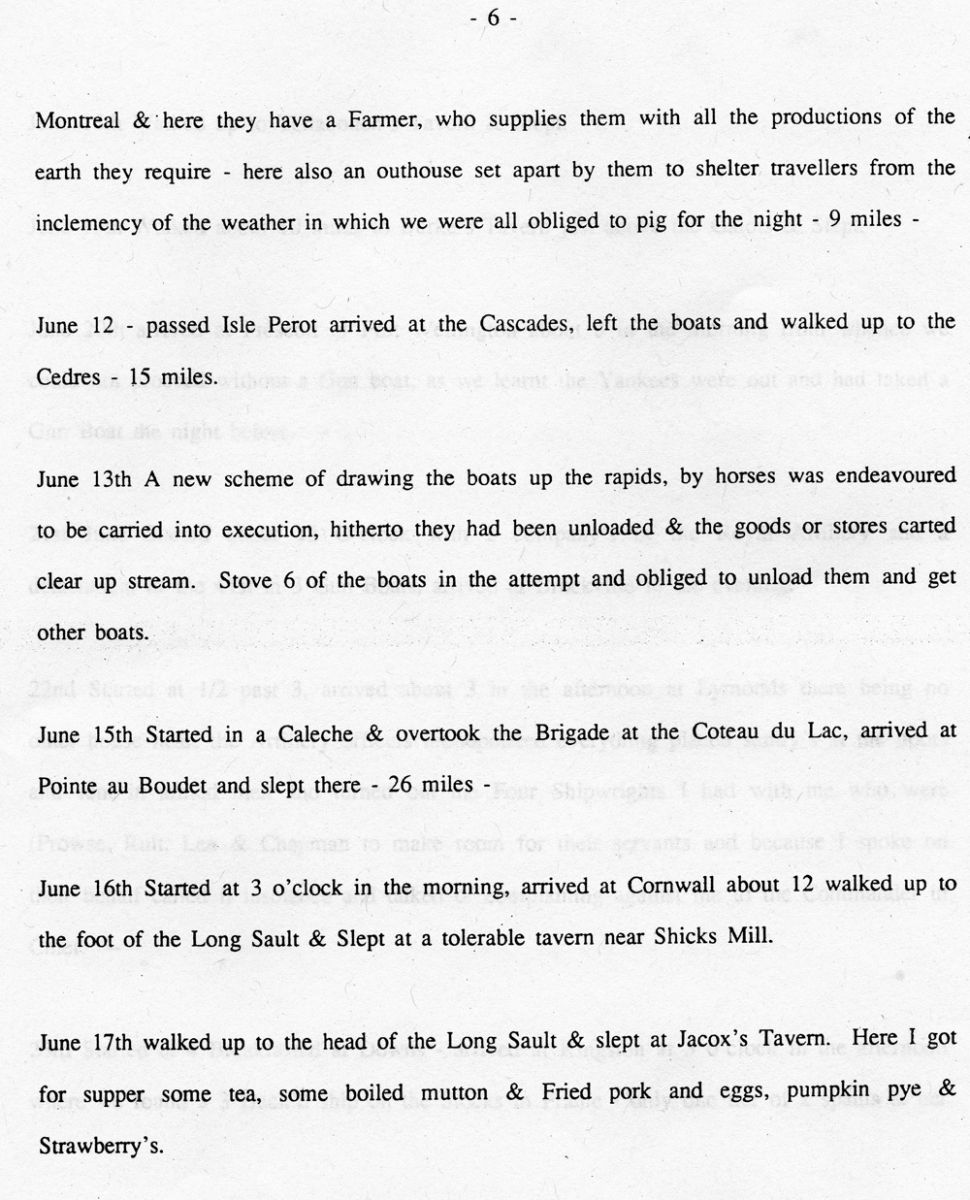 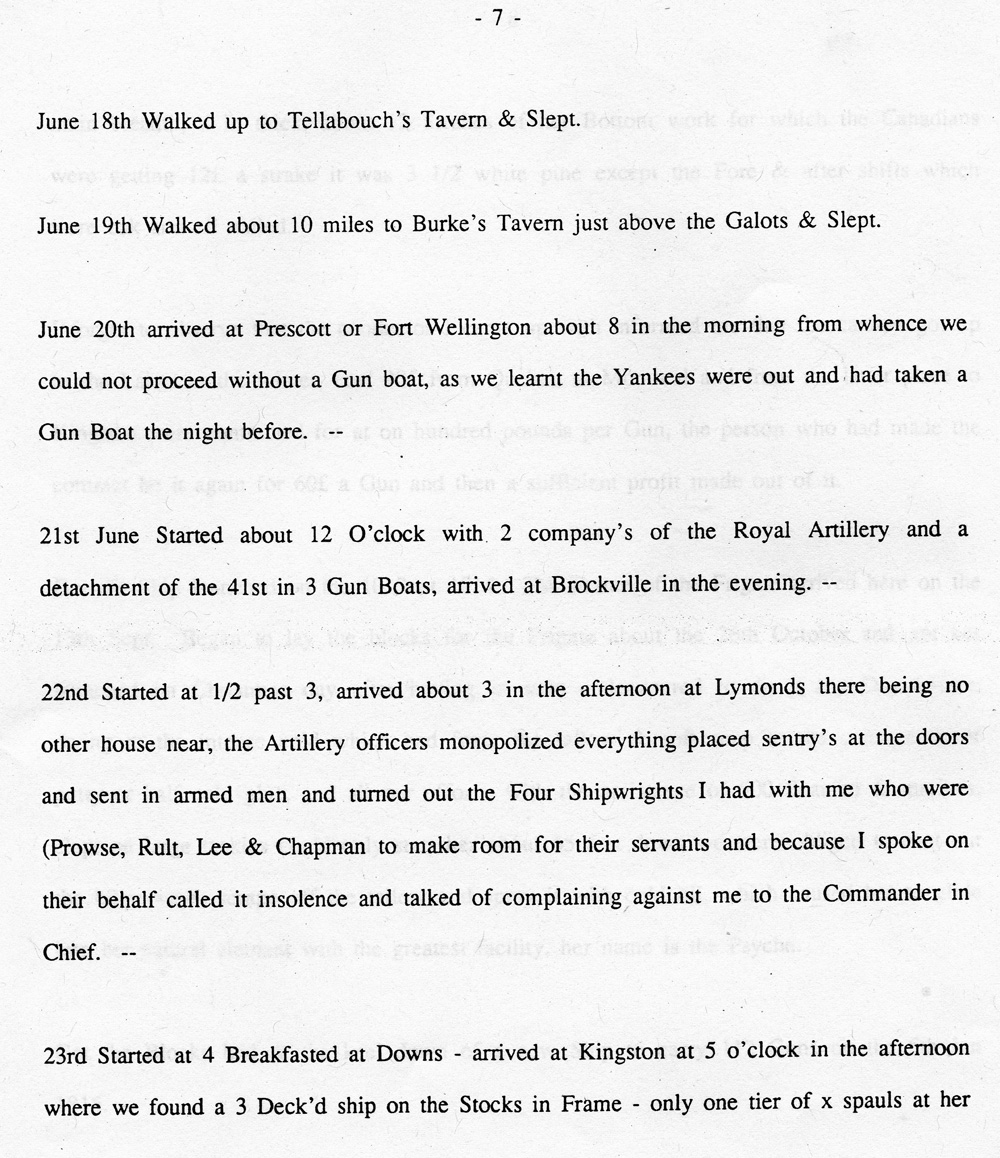 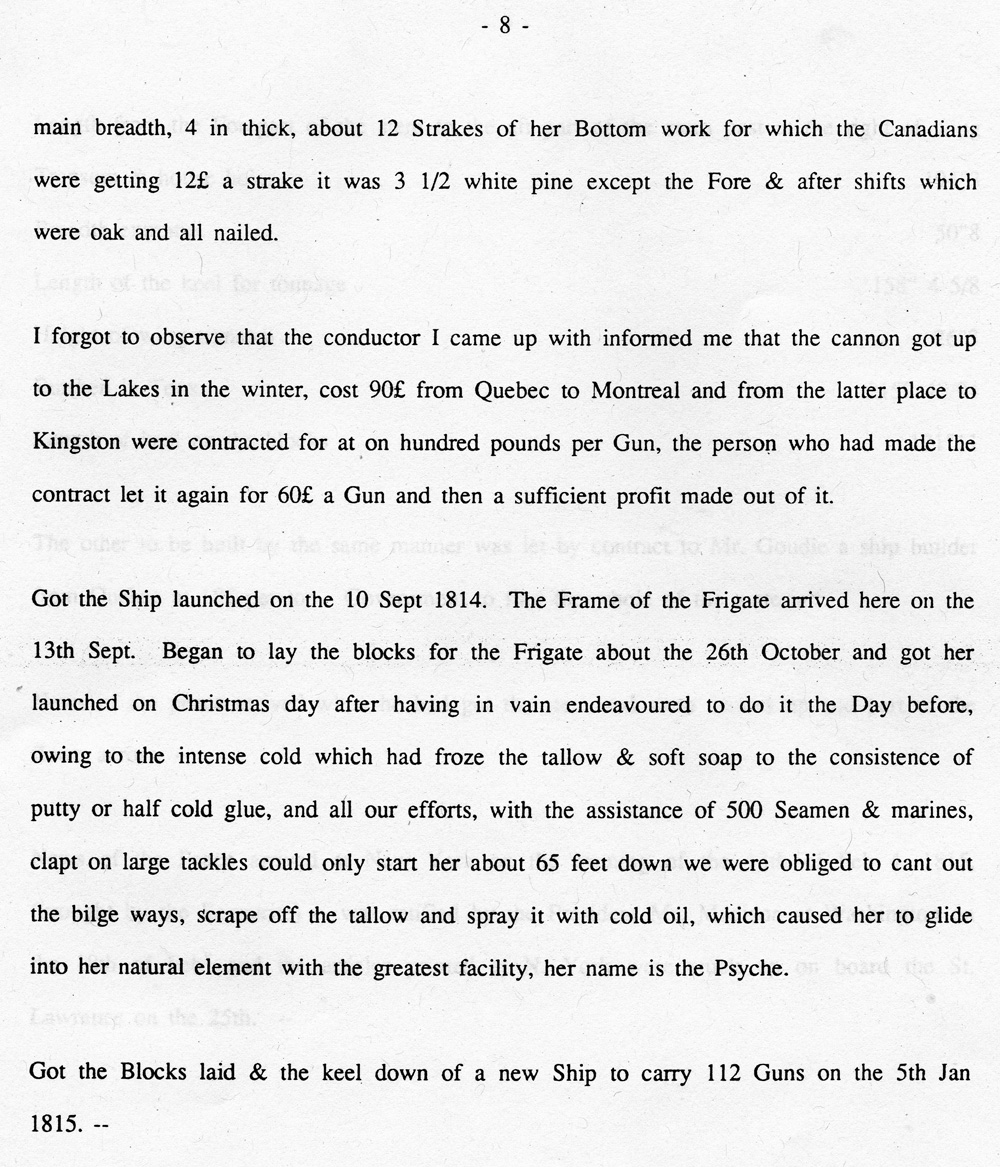 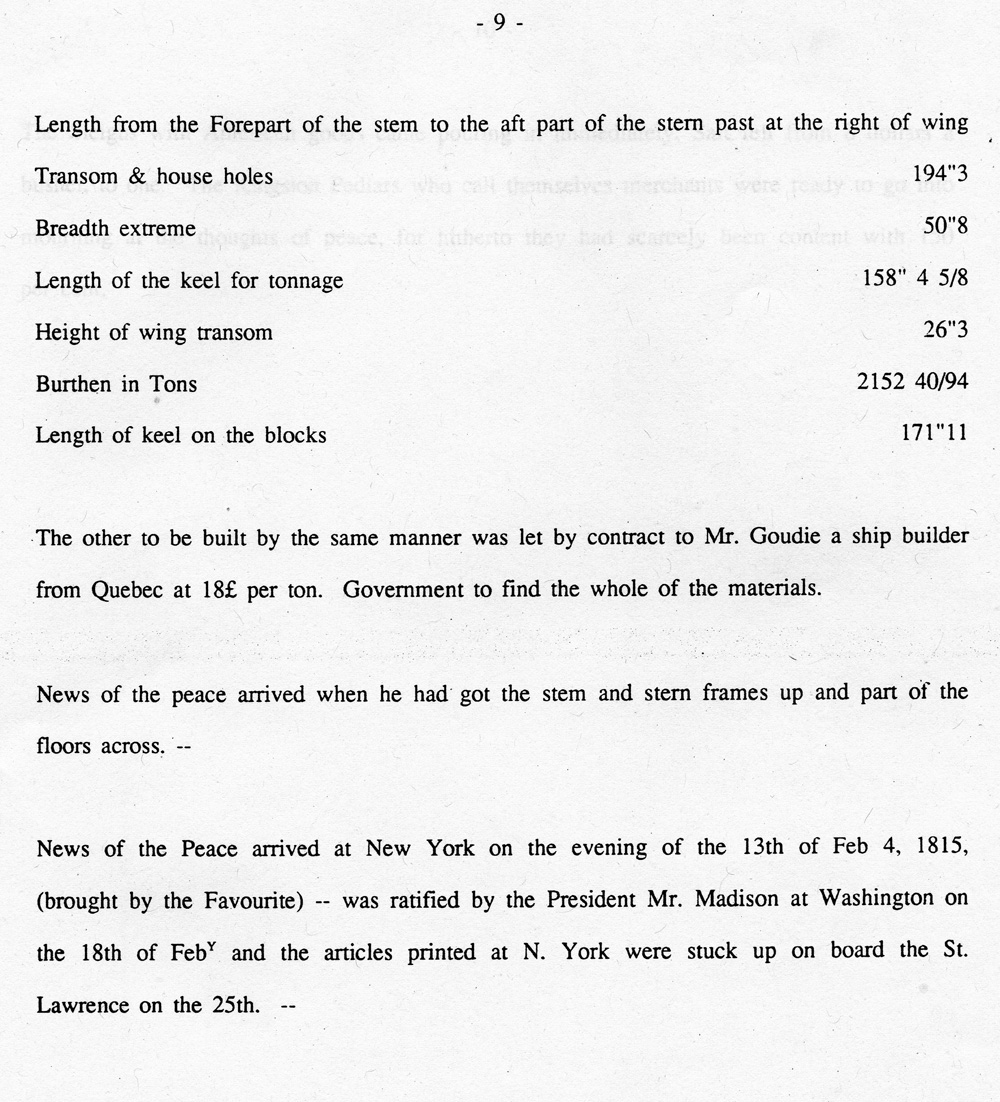 The Sleighs with American goods came pouring in immediately, Salt fell from 8 dollars a bushel to one. The Kingston Pedlars who call themselves merchants were ready to go into mourning at the thought of peace, for hitherto they had scarcely been content with 150 per cent.

Unsurprisingly, the merchants, and tradesmen were the people who benefited the most during the war. As Mossington indicates, those that benefited from this economic prosperity were apprehensive, rather than joyous, about the forthcoming end of the war.

Ships and Supplies Declaration of Peace