Months prior to the war, the atmosphere in Kingston was full of apprehension and concern. Nothing was certain, but there were countless rumours spreading about the impending war. Through personal letters and newspaper articles, Canadians demonstrated their awareness and fears about the forthcoming conflict with the United States.

On April 22, 1812, William Baldwin (1775-1844), a lawyer and businessman from York, Upper Canada, wrote to a letter to William Firth, revealing about the imminent war. Baldwin stresses Canada’s loyalty to Great Britain, but admits that the country is “ill provided for our defence.” 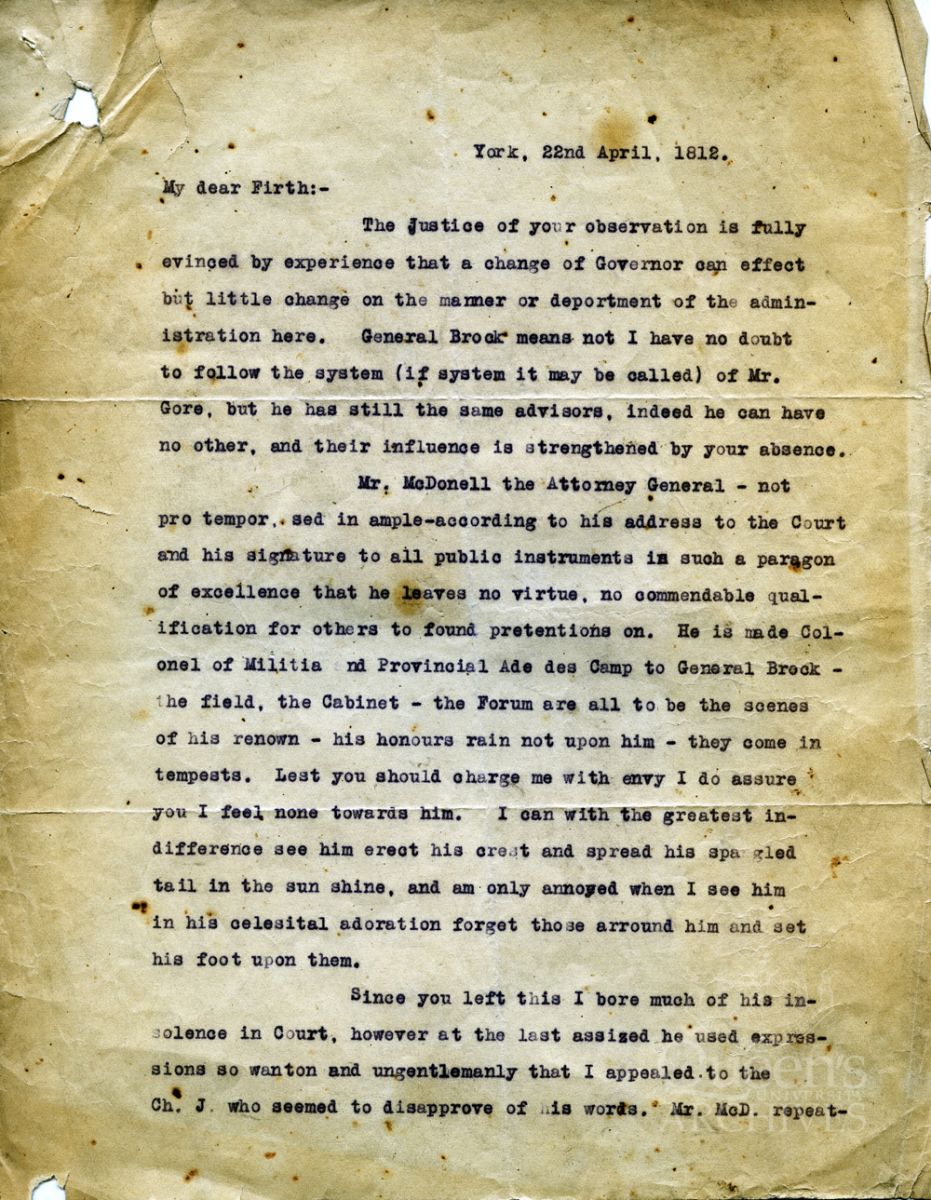 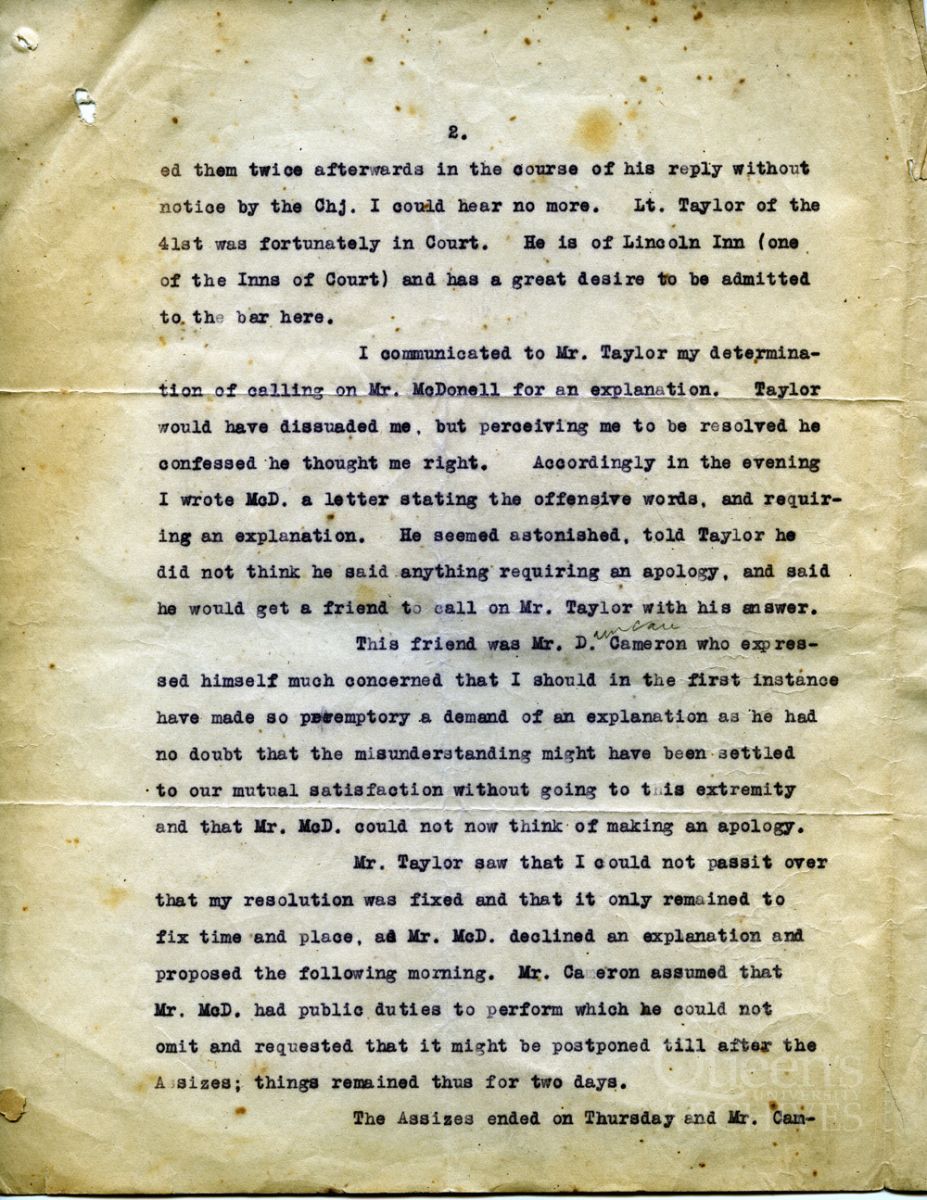 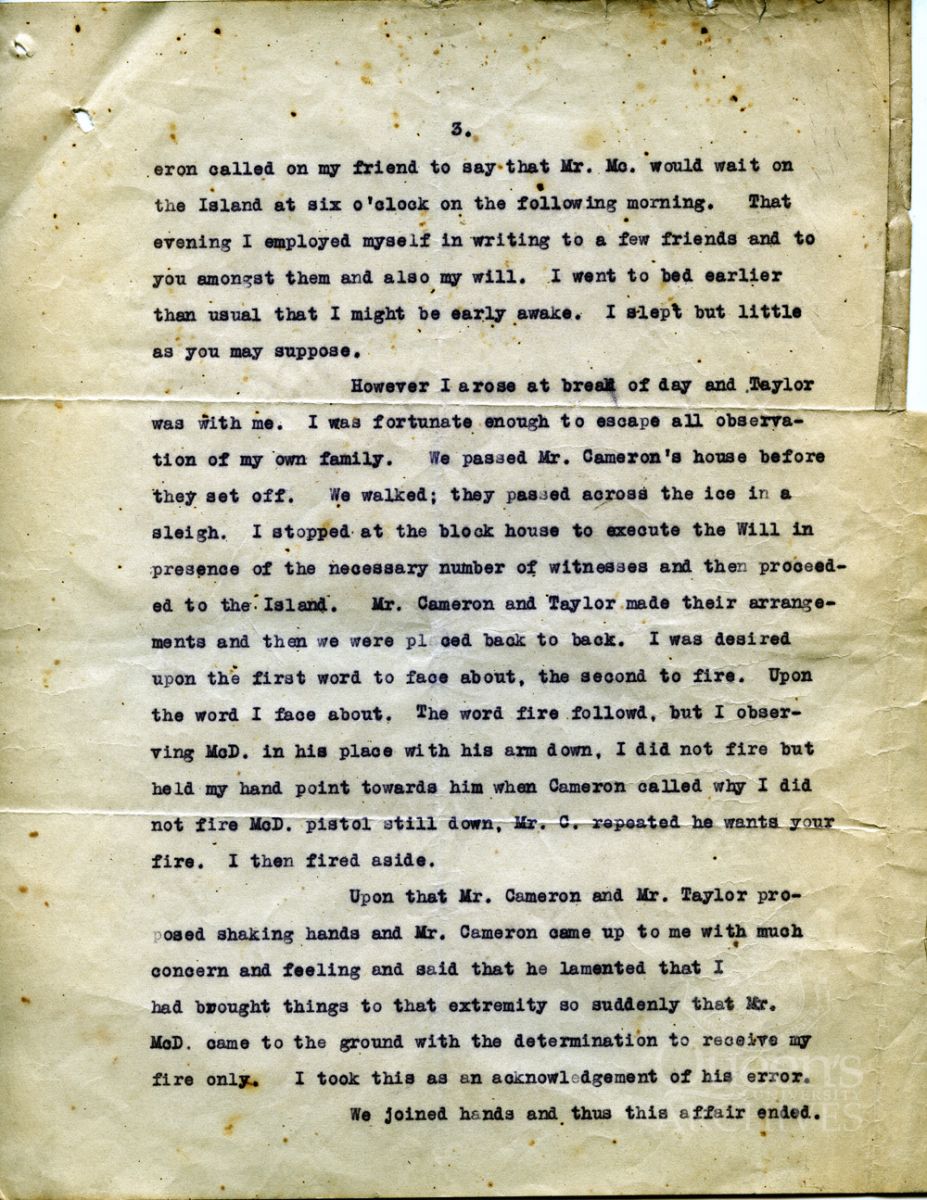 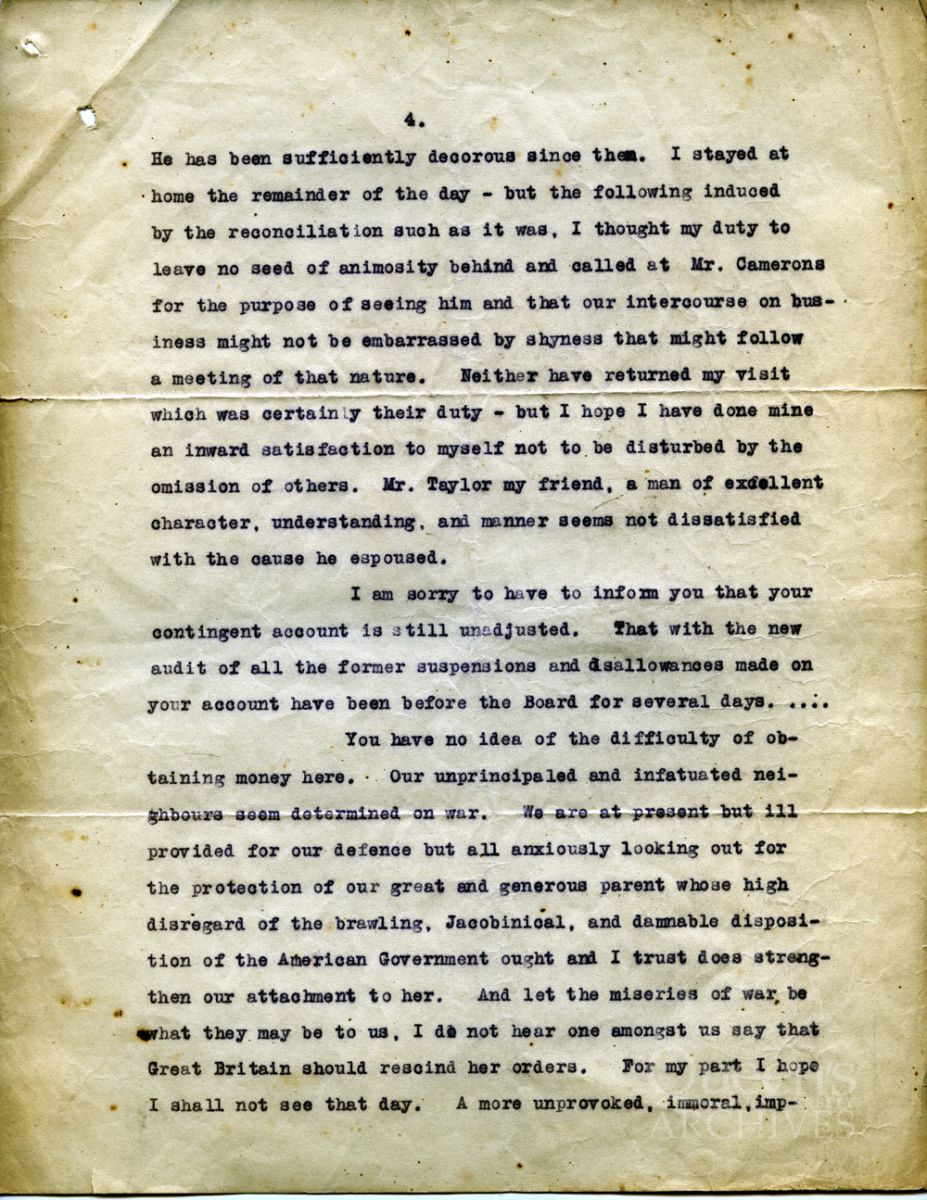 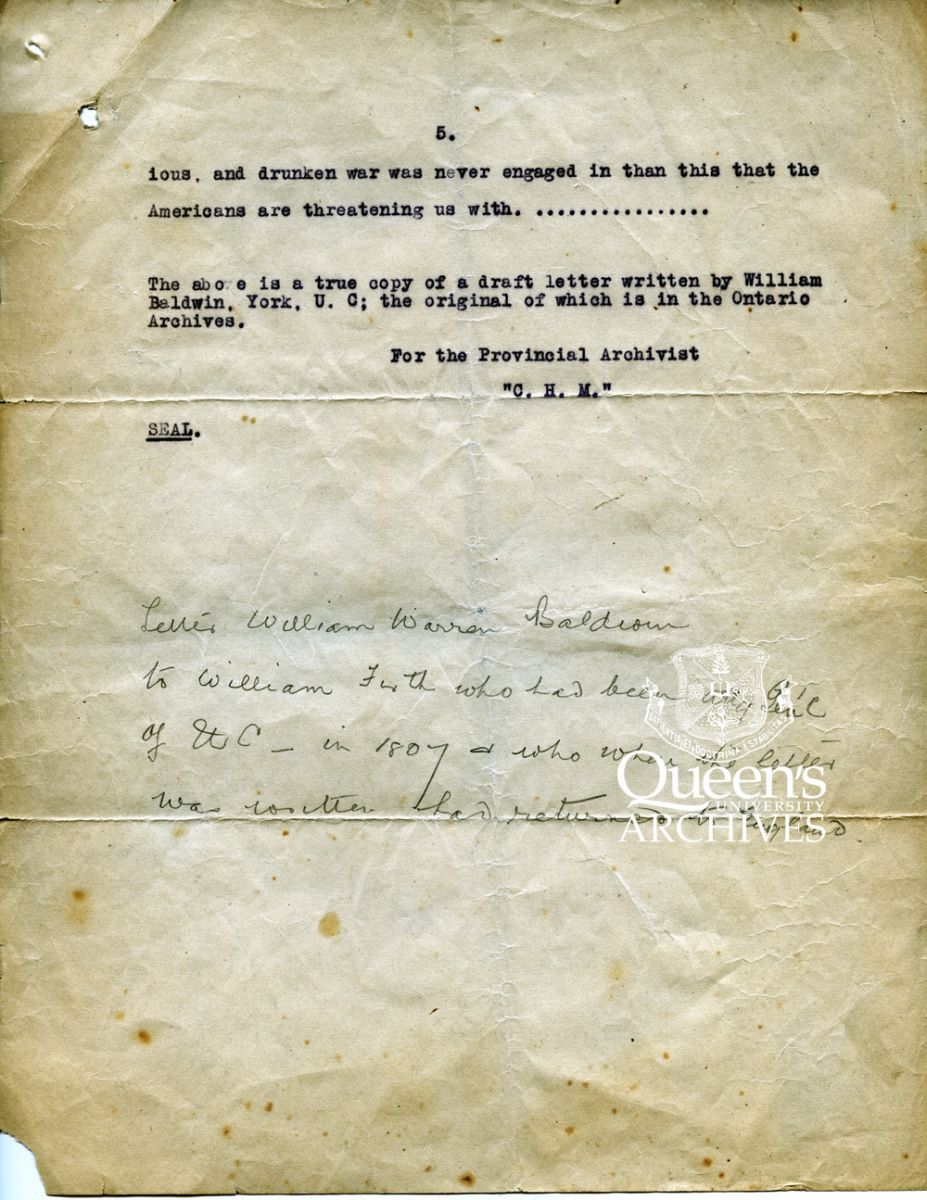 Our principled and infatuated neighbours seem determined on war. We are at present but ill provided for our defence but all anxiously looking out for the protection of our great and generous parent whose high disregard of the brawling Jacobinical, and damnable disposition of the American Government ought and I trust does strengthen our attachment to her. And let the miseries of war, be what they may be to us. I do not hear one amongst us say that Great Britain should rescind her orders. For my part I hope I shall not see that day. A more provoked, immoral, impious and drunken war was never engaged in than this that the Americans threatening us with...

The above is a true copy of a draft letter written by William Baldwin. York, U.C.; the original of which is in the Ontario Archives 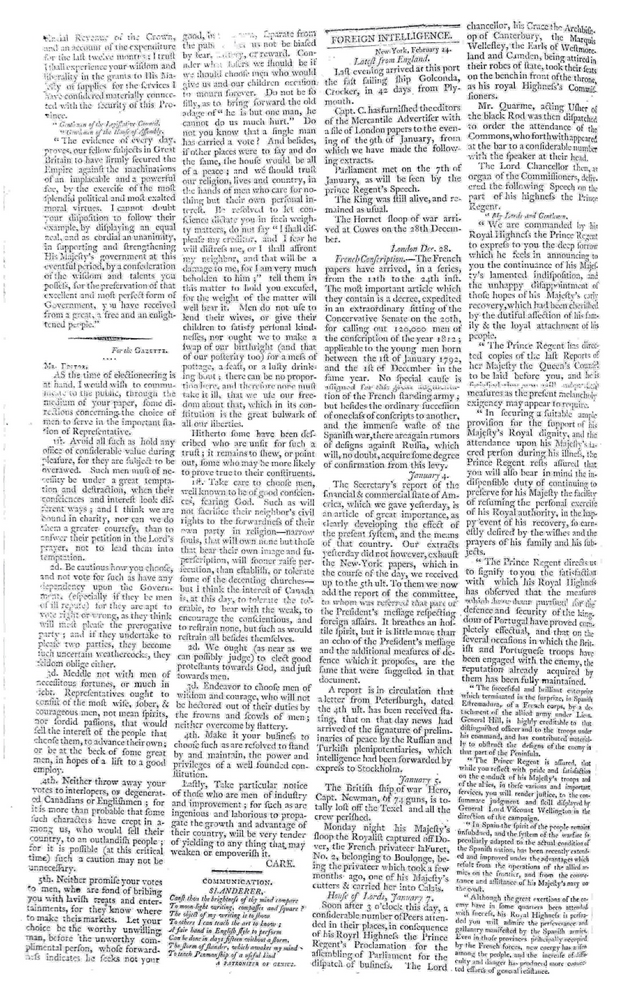 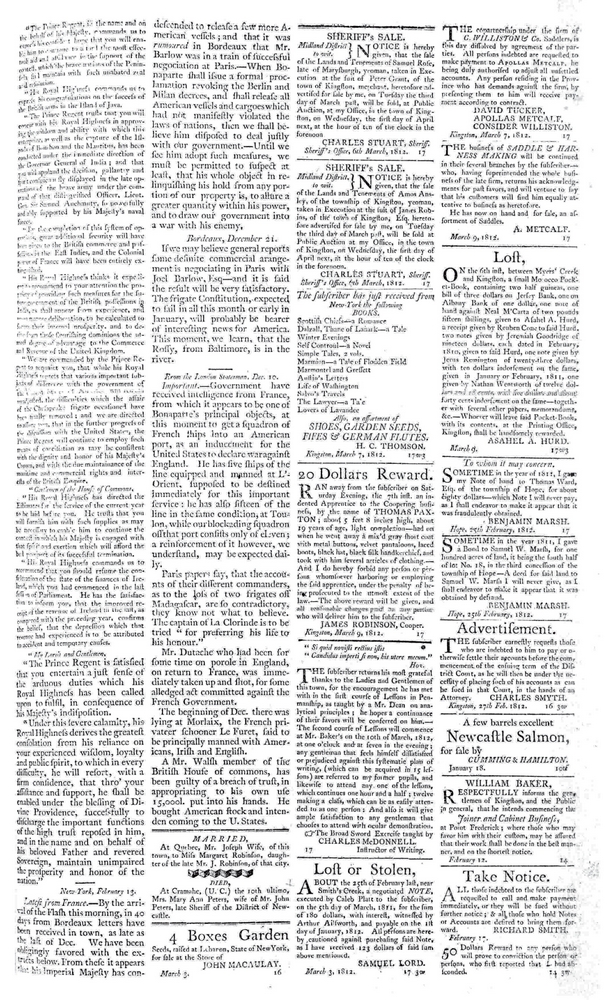 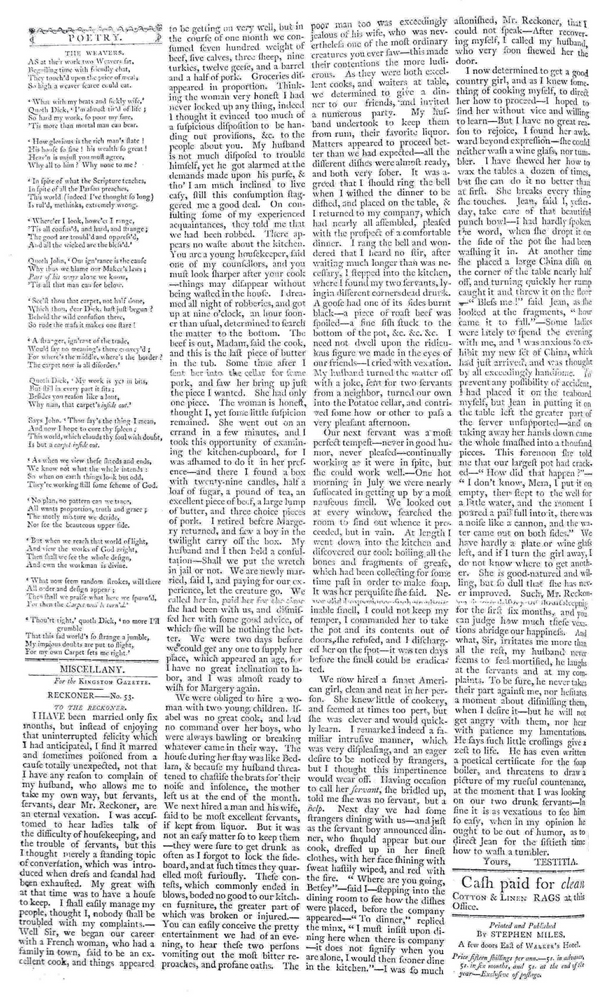 Government have received intelligence from France from which it appears to be one of Bonaparte’s principal objects at this moment to get a squadron of French ships into an American port, as an inducement for the United States to declare war against England.

A month after the declaration of war, the Gazette featured a statement from President James Madison, who discloses America’s motivations for war. Madison affirms:

British cruisers have been in the continued practice of violating the American flag on the great highway of nations and of seizing and carrying off persons failing under it; noting the exercise of a belligerent right founded on the law of nations against an enemy, but of a municipal prerogative over British subjects...

British jurisdiction is thus extended to neutral vessels in a situation were no laws can operate but the law of nations and the laws of the country to which the vessels belong; and a felt redress is assumed, which if British subjects were wrongfully detained and alone concerned, is that substitution of force for a resort to the responsible sovereign, which falls within the definition of war. 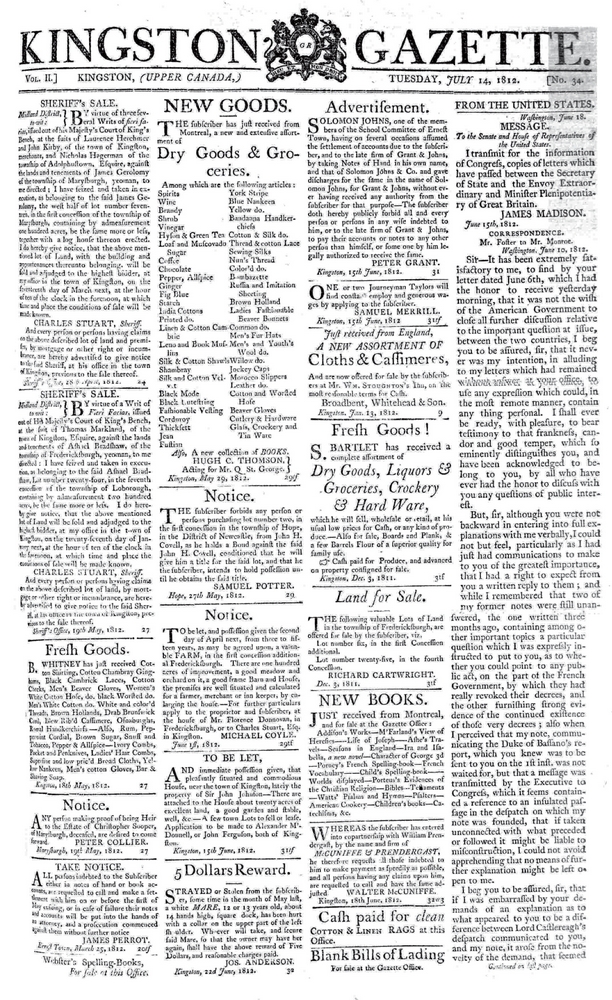 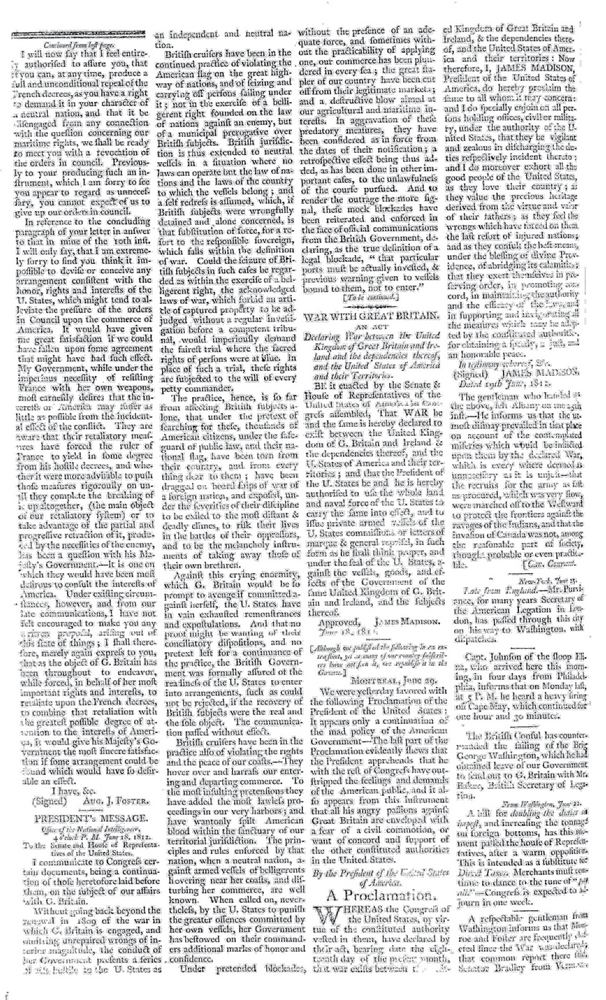 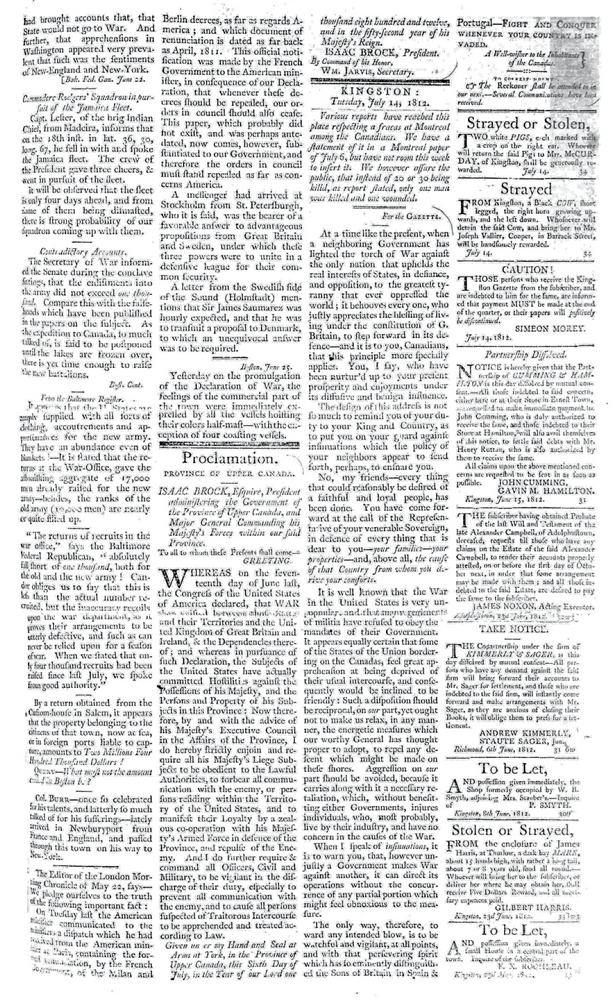 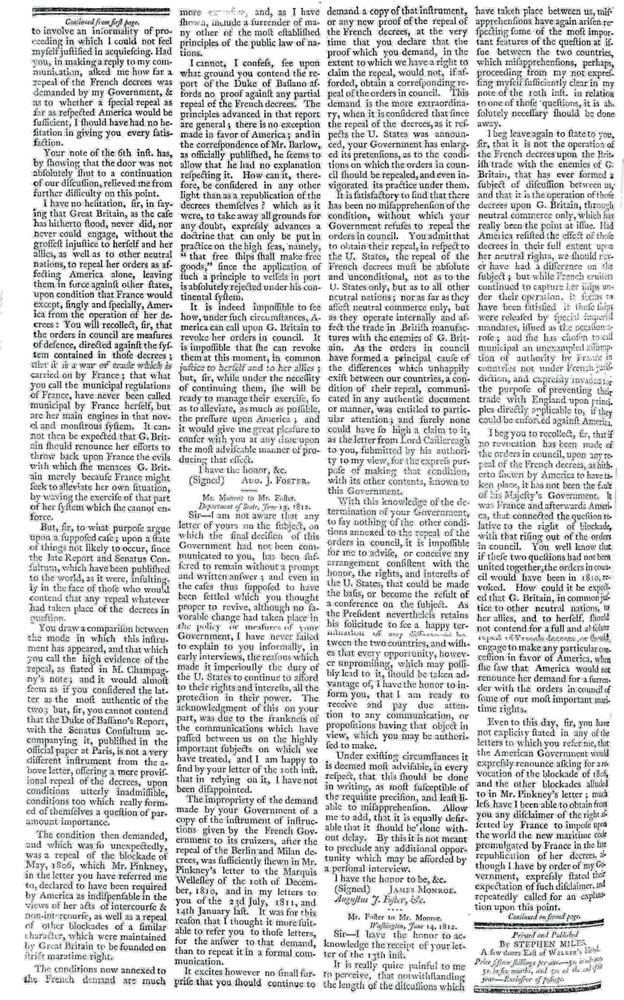 In that same issue, Sir Isaac Brock, the British army officer and administrator, made a proclamation to the people of Upper Canada. Calling on the support of the masses, Brock asserts:

I do strictly enjoin and require all his Majesty’s Leige Subjects to be obedient to the Lawful Authorities, to forbear all communication with the enemy, or persons residing within the Territories of the United States, and to manifest their Loyalty by a zealous cooperation with his Majesty’s Armed Force in defence of the Province and repulse of the Enemy...

I do further require & command all Officers, Civil and Military, to be vigilant in the discharge of their duty, especially to prevent all communication with the enemy, and to cause all persons suspected of Traitorous Intercourse to be apprehended and treated according to Law...

At a time like the present, when a neighbouring Government has lighted the torch of War against the only nation that uphelds the real interests of States, in defiance, and opposition, to the greatest tyranny that ever oppressed the world, it behoves every one, who justly appreciates the blessing of living under the constitution of G. Britain, to step forward in its defence – and it is up to you, Canadians, that this principle more specially applies. 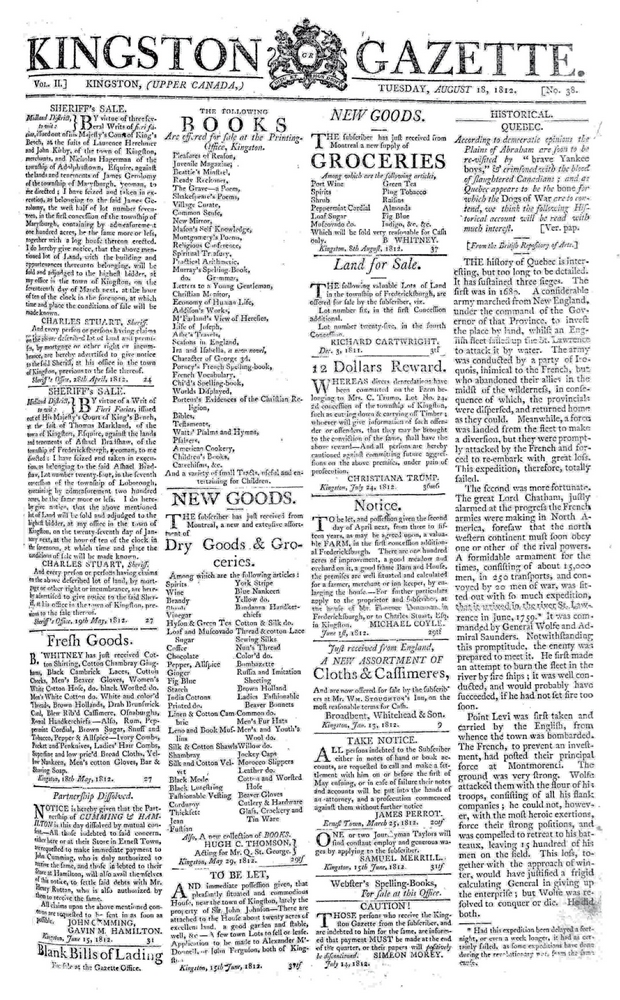 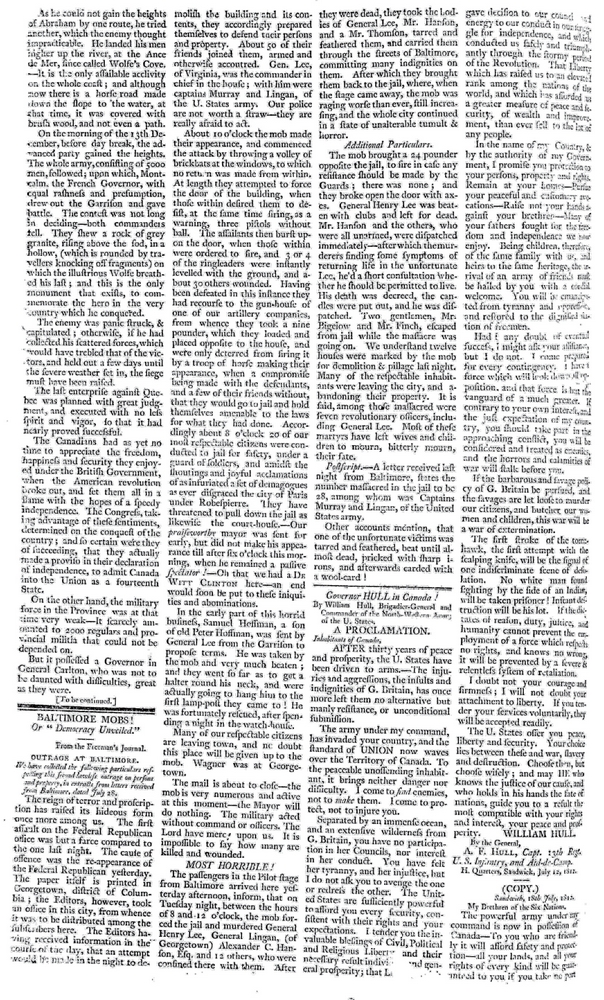 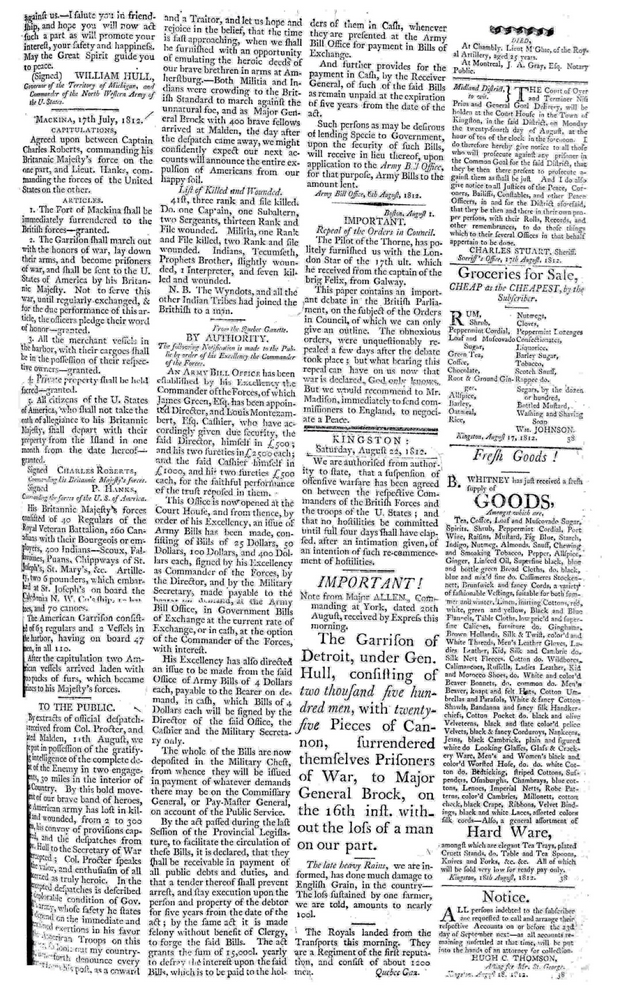 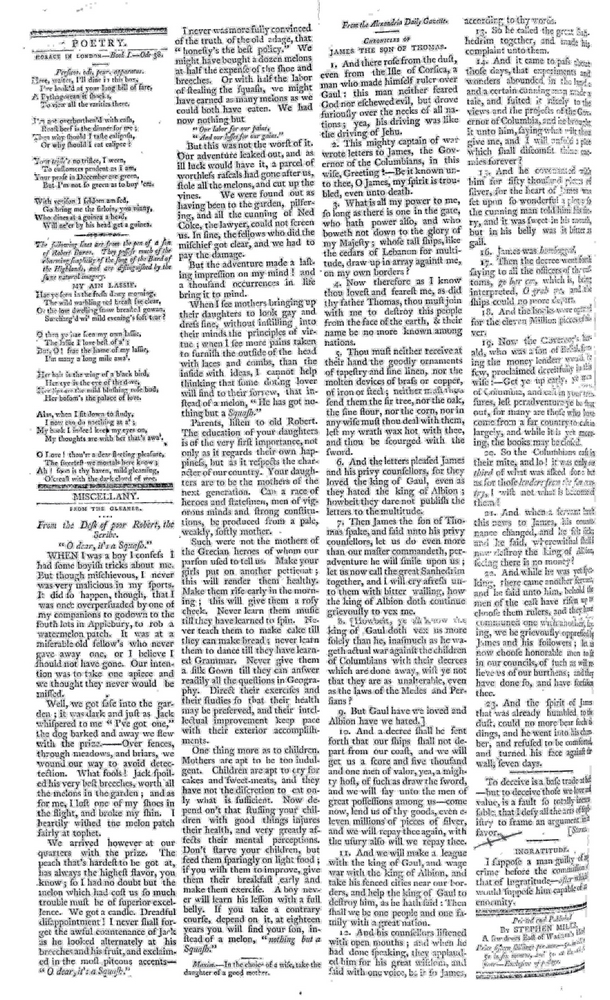 On August 18, 1812, the Gazette stresses the American goals of annexing Canada “into the Union as a fourteenth State.” William Hull, an American general, reportedly declares:

The U. States offer you peace, liberty, and security. Your choice lies between these and warm slavery and destruction. Choose then, by choose wisely; and may HE, who knows the justice of our cause, and who holds in his hands the fate of nations, guide you to a result the most compatible with your rights and interest, your peace and prosperity.

To combat American propaganda, the House of Assembly calls on the patriotism of the people of Upper Canada through the Kingston Gazette:

And beholding as we do, the flame of patriotism burning from one end of the Canadas to the other, we cannot but entertain the most pleasing anticipations. Our enemies have indeed said, that they can subdue this country by a proclamation; but it is our parts to prove to them that they are sadly mistaken that they population is determinately hostile, and that the few who might be otherwise inclined, will find it their safety and interest to be faithful.

For nothing is clearer than this, that if there be any person so base and degenerate as to join the enemy after having taken the Oath of Allegiance, be not only forfeits his property but his life. 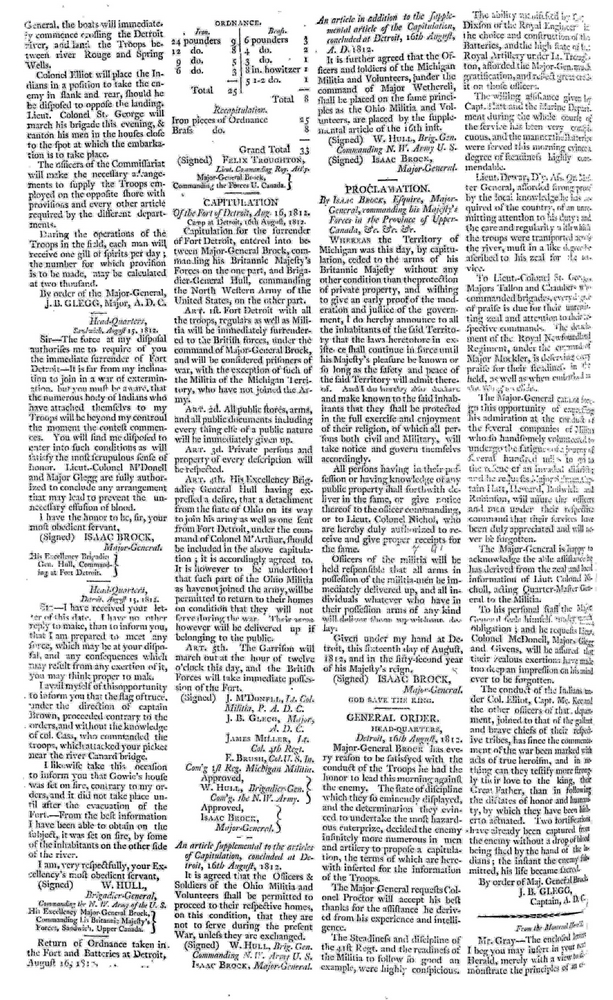 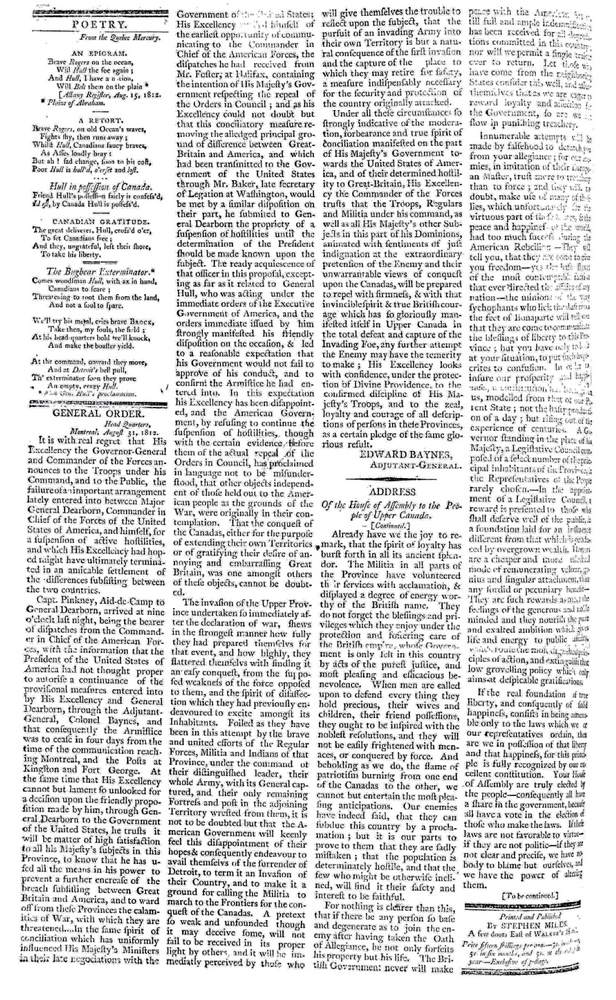 On August 7, 1812, the Wickens Family discusses about the incoming armies. 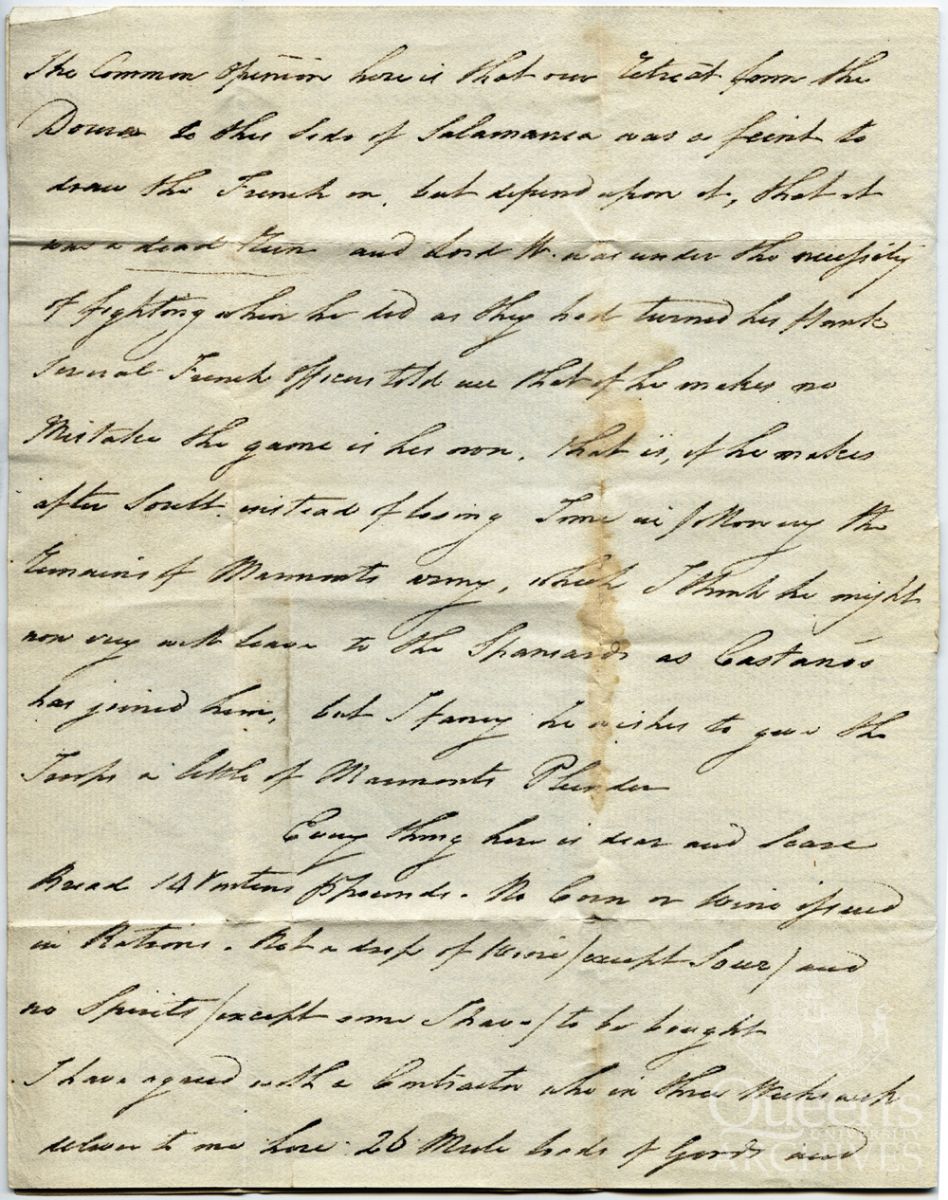 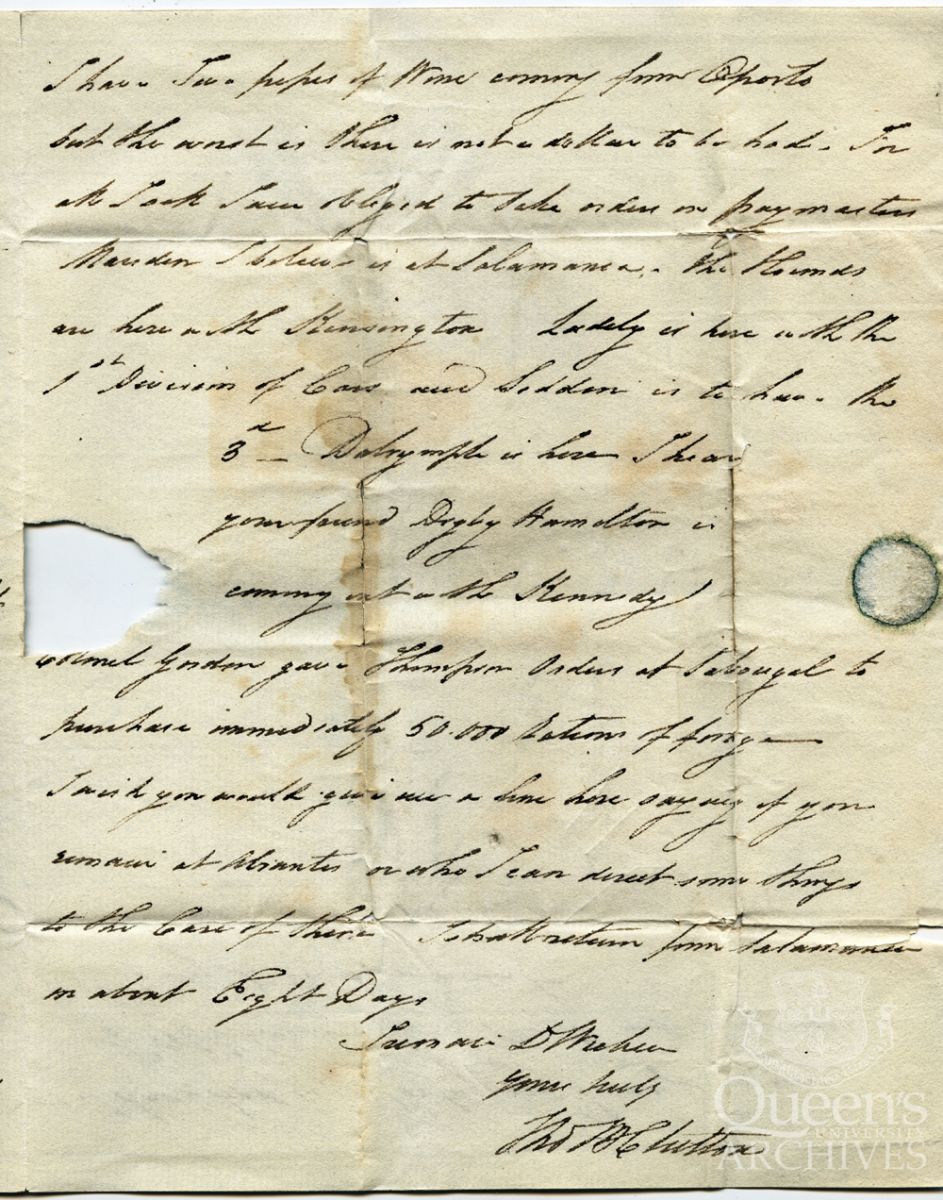