Through the Treaty of Ghent, the War of 1812 finally ended on February 18th, 1815. The three years of warfare not only increased Kingston’s wealth and population, but also fostered a sense of anti-Americanism. While the Americans became more anti-British, Canadians became increasingly loyal to Great Britain and subsequently, became more loyal to their nation. As a result of the war, Canadians further matured as a nation, creating a strong collective identity.

Likewise, Kingston politically and economically matured as well. When York was attacked, the government of Upper Canada briefly moved to Kingston, establishing the town as a political centre.

Kingston economically prospered as its suppliers met the demands across Upper Canada. Kingston had surpassed its former self. It was no longer the small village of one hundred fifty houses, a school, a handful of shops and two churches. Not only did merchants find an increase in their capital, but contractors were also sought-after to construct houses and hotels for a rising population. 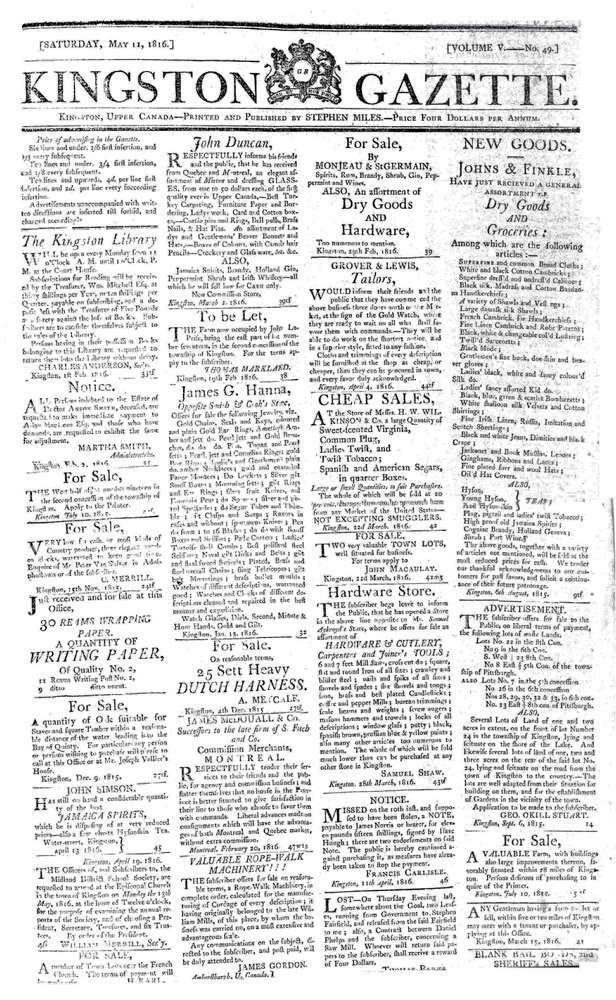 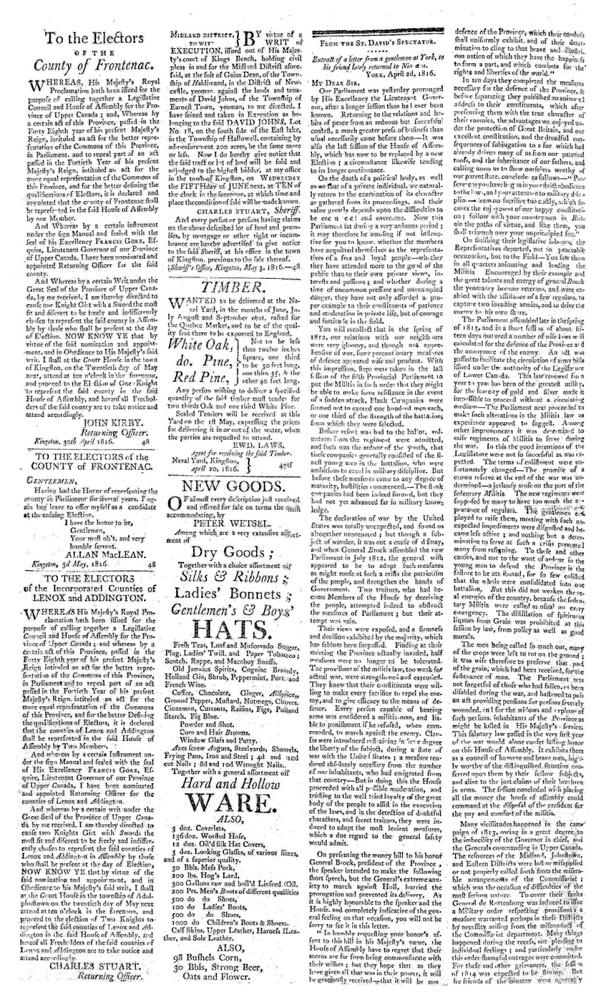 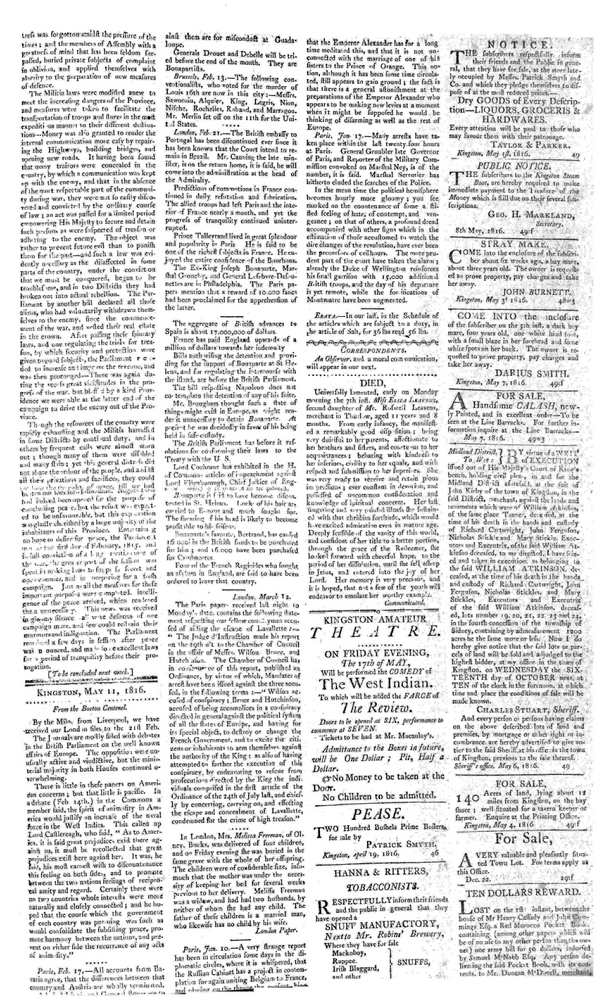 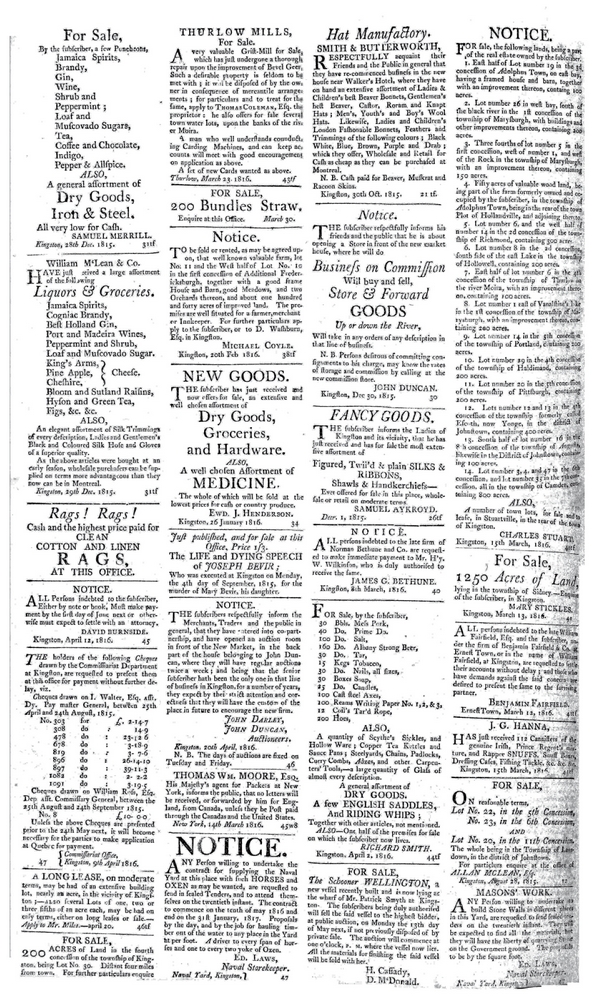 On May 11, 1816, the Kingston Gazette retrospectively reflects on the war and its aftermath:

The declaration of war by the United States was totally unexpected and found us altogether unprepared; but though a subject of wonder, it was not a cause of dismay, and when General Brock assembled the new Parliament in July 1812, the general wish appeared to be to adopt such measures as might rouse at such a crisis the patriotism of the people, and strengthen the hands of Government...

Every person capable of bearing arms was considered a militia-man, and liable to punishment if he refused, when commanded, to march against the enemy...

The Parliament was not forgetful of those who had fallen, or been disabled during the war, and the hastened to pass an act providing pensions for persons severely wounded and for the widows and orphans of such persons, inhabitants of the Province as might be killed in His Majesty’s service.

After the war, the government granted land to deserving Canadians and redistributed properties that were abandoned by treasonous citizens.

Upper Canada land transactions collection, 2266-2-7
An Act to provide for the Disposal of Public Lands in this Province

The Proclamation of 1814 defined the way land was to be distributed. Some of the terms included:

An ACT to provide for the Disposal of the Public Lands in this Province, and for other Purposes therein mentioned...

... after the passing of this Act no free grant shall be made of any of the public lands in this Province to any person or persons whomsoever, except U.E. loyalists and their children, and such other persons as are not entitled to a free grant of public land under or by virtue of any Order in Council or other regulations of Government now in force and effect... (p 1)

And be it further enacted, by the authority aforesaid, that any military or naval officer, or other person entitled to an allowance in money in lieu of lands, under any existing order of regulation, shall be entitled to purchase of any of the public lands aforesaid, and shall receive credit upon any such purchase to the full extent of the said allowance... (p 2) 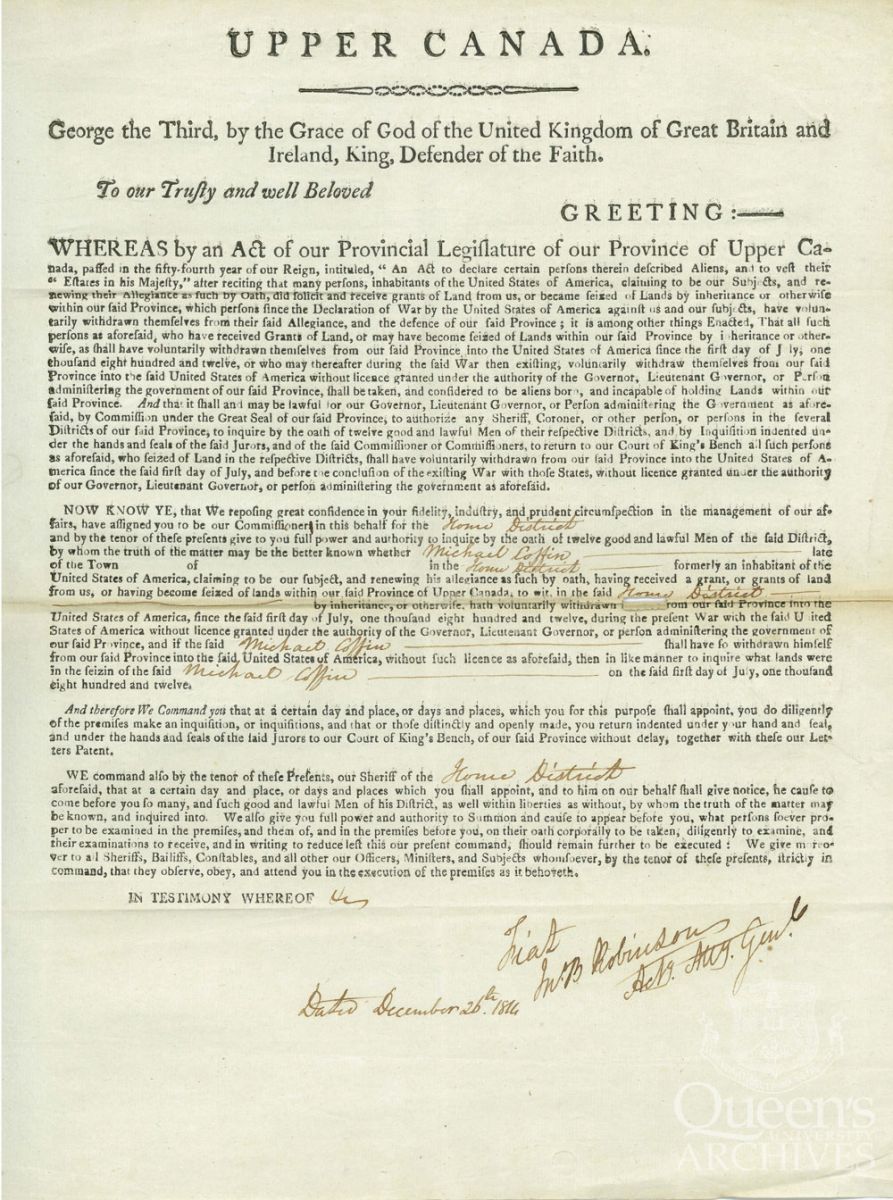 The government seized the land from Canadians who had deserted their properties during the war. Dated December 26, 1816, the following are land transactions from the districts of Home, London and Newcastle.

On April 18, 1816, there was a trade agreement created by the Canadians concerning trade with the Americans. The Order of the Lieutenant Governor in Council stated that this arrangement was, “An Act for making temporary provision for the Regulation of Trade between this Province and the United States of America by Land or Inland Navigation.”

The war ultimately augmented a sense of antagonism between America and Canada. Canadians became hyper-sensitive and paranoid about their southern neighbours. No one felt this sense of collective hatred more than Reverend Dr. Edward Johnstone.

In an article by an unknown author, Edward Johnstone was described to an Irish preacher who offered a position in Canada by the Methodist Missionary Committee in 1817. As a consequence of his short-term stay in Albany, New York, Johnstone was ostracized from the Canadian community. After only a couple years, Johnstone left Canada in defeat.

Following are excerpts from the article about the causes of Johnstone’s departure:

“As a parting shot, at the next District Conference held in February, he was tried in absentia:

Disaffection to the cause in which he was engaged manifested by an indifference to the interests of the Society and a warm attachment to those persons belonging to American Society who have been and still are the inveterate persecutors of our brethren. During the time he remained in Kingston the Society was reduced from 28 to 17 members and the Congregation nearly lost.

In fairness to him, he was probably misled as to the State of the Canadas. He did not realize the fear of the Americans held by the locals. The suspicion is that he was a rather unperceptive, stubborn Irishman who happened to be the wrong man in the wrong place at the wrong time. His later long and respected service in the Irish Methodist cause tends to confirm this.” (5)

While the war brought great prosperity to the small town of Kingston, it inevitably increased hostilities between the United States and Canada. It simultaneously fueled a sense of nationalism and antagonism.