Although Kingston was not martially involved in the hostilities, countless men, either from the town or from nearby, were directly engaged in battle against the Americans.

In his letters with his various correspondences, Joel Stone, a businessman and militia officer in the Gananoque area near the St. Lawrence River, details the military and fiscal aspects of the war. During this time, Stone assisted in securing the borders and distributing supplies. On September 21, 1812, Gananoque was attacked by the Americans, who destroyed its one and only military depot built by Stone.

The following are sample letters between 1812 and 1826 from Joel Stone’s collection of correspondences. 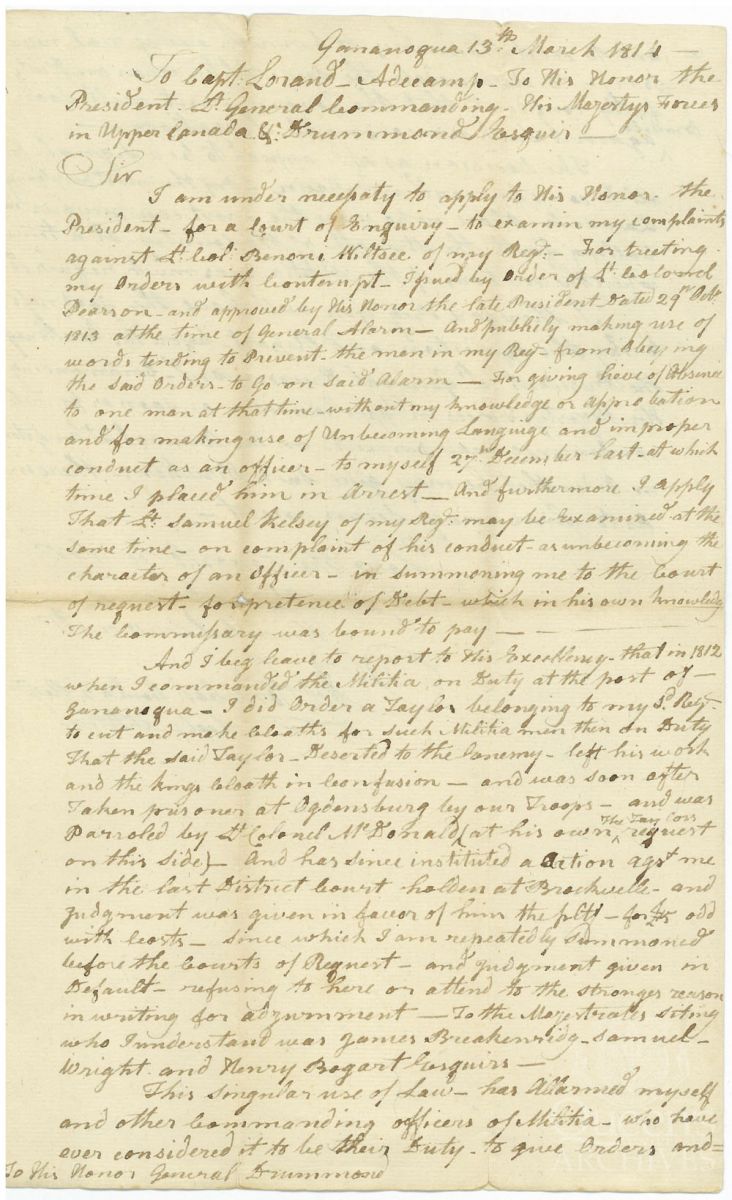 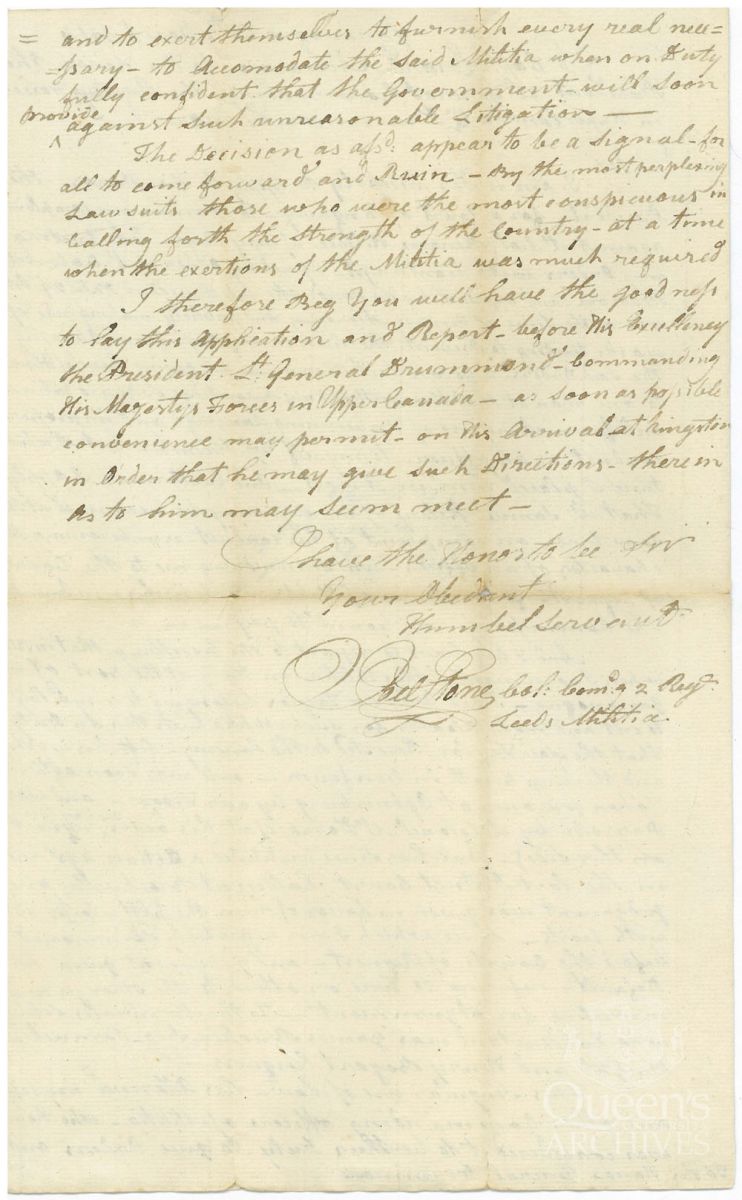 A letter dated October 21, 1814 remarks about, “certain Persons from the American shore concerned in stealing Horses or in aiding... in such practices.”

On October 21, 1814, Nathaniel Coffin writes to Stone about their course of action against the Americans. Coffin asserts that they should

request them to give up their fleets and the Lake, to have no fortifications near them, to have a new boundary, to acknowledge the Indians our Allies and give them up the Michigan Country and several other little things unpleasant to their feelings. 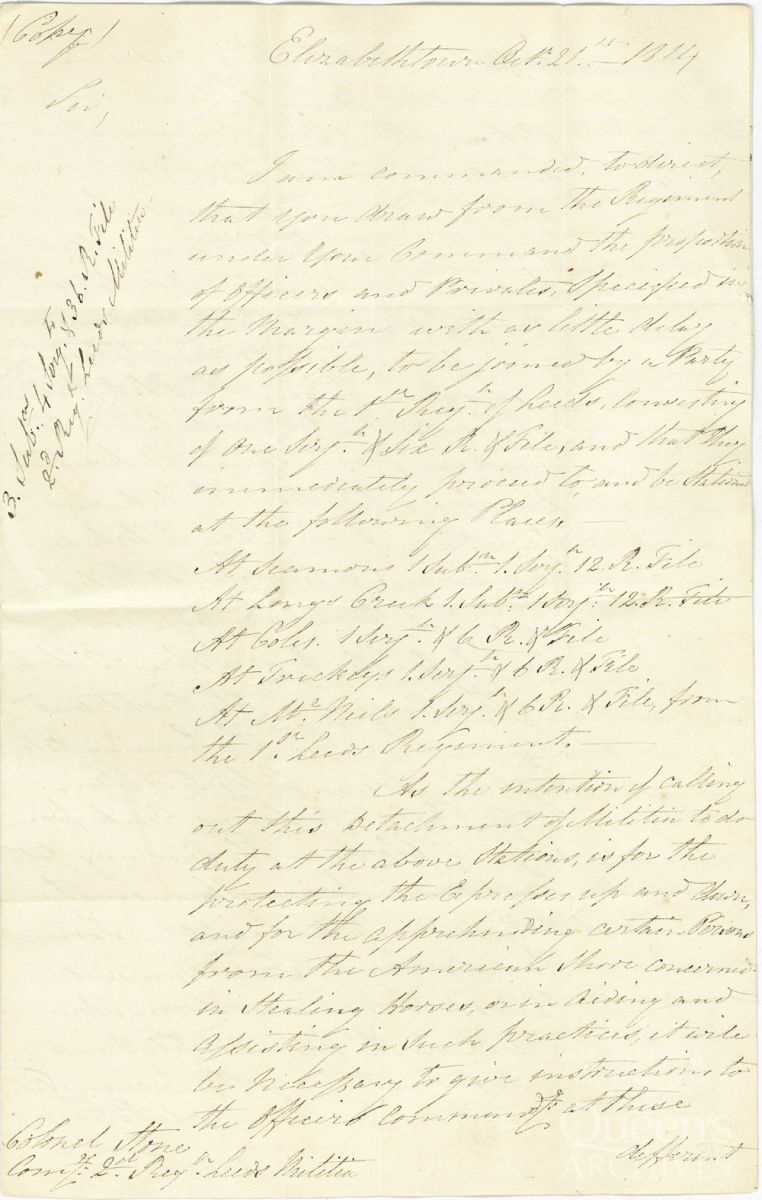 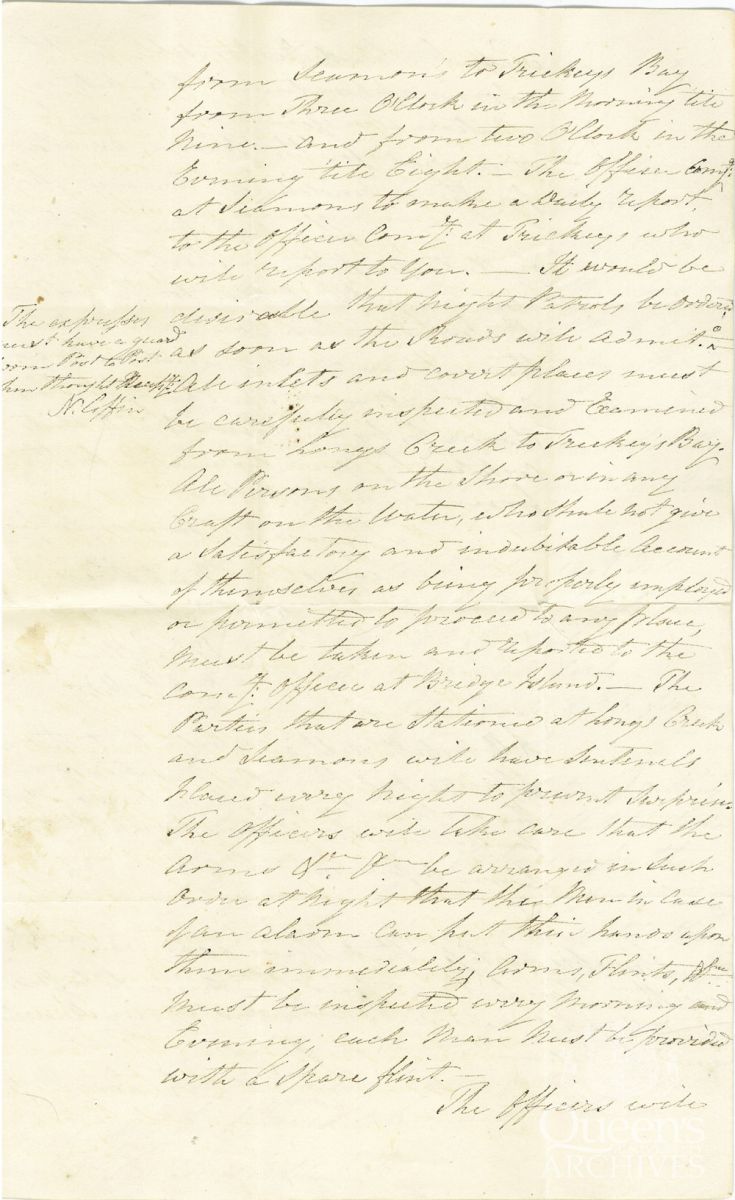 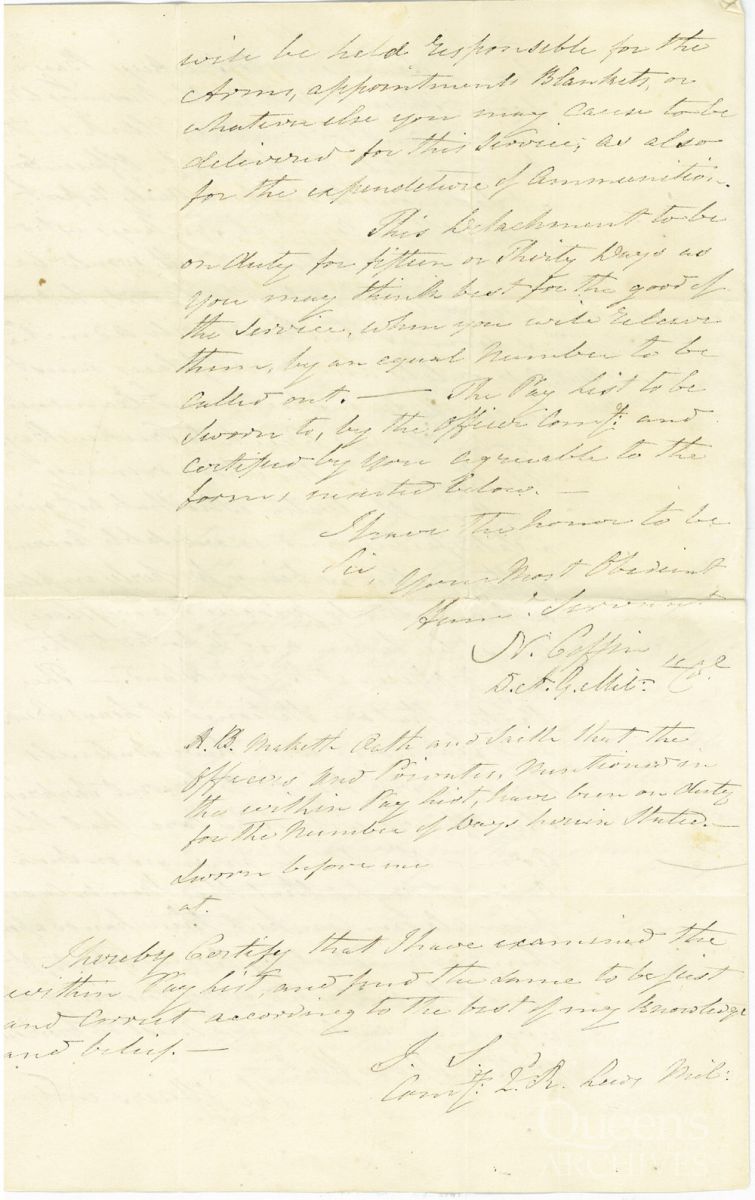 On April 7, 1815, Nathaniel Coffin writes to Stone regarding a slight disagreement between Colonel Cartwright and Stone. Coffin states:

The report for your claim is not so favourable as I could have wished. Colonel Cartwright insists that you were not ordered on duty at Gananoque that Capt. Schofield was the person, and that you was no more on duty than any other Colonel. 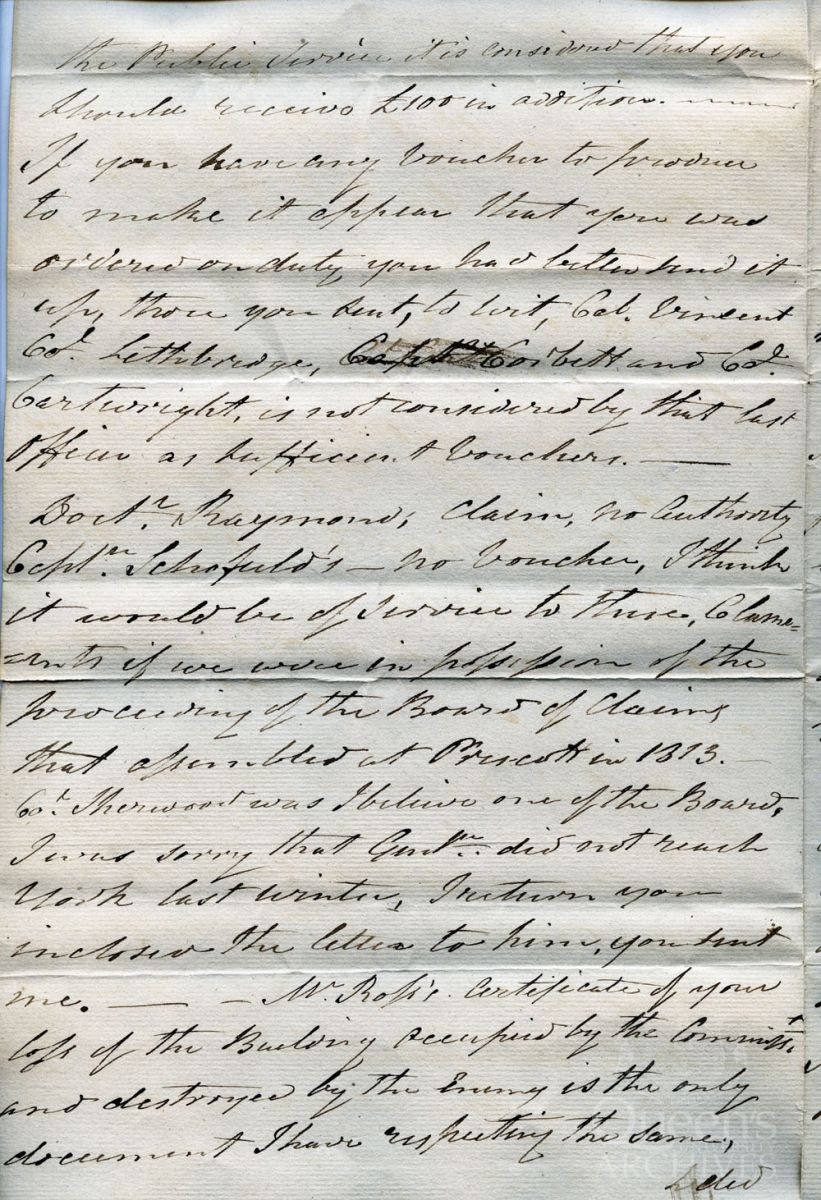 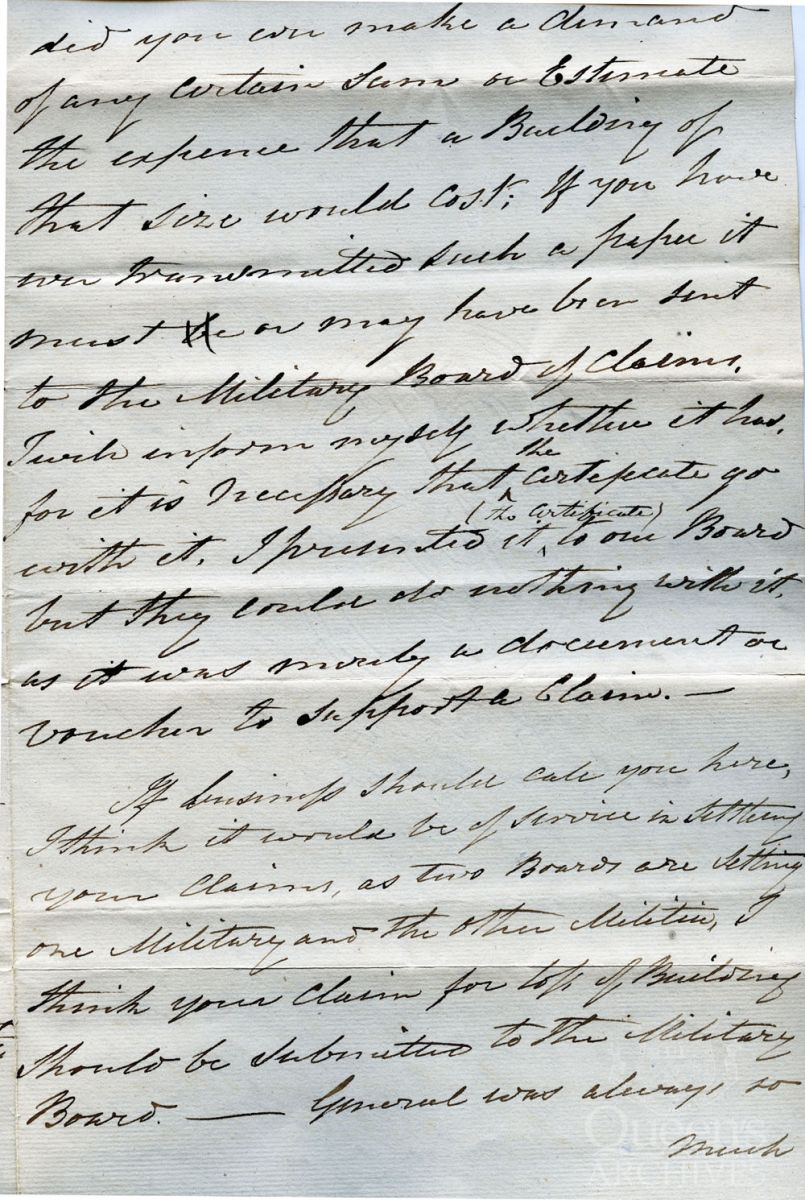 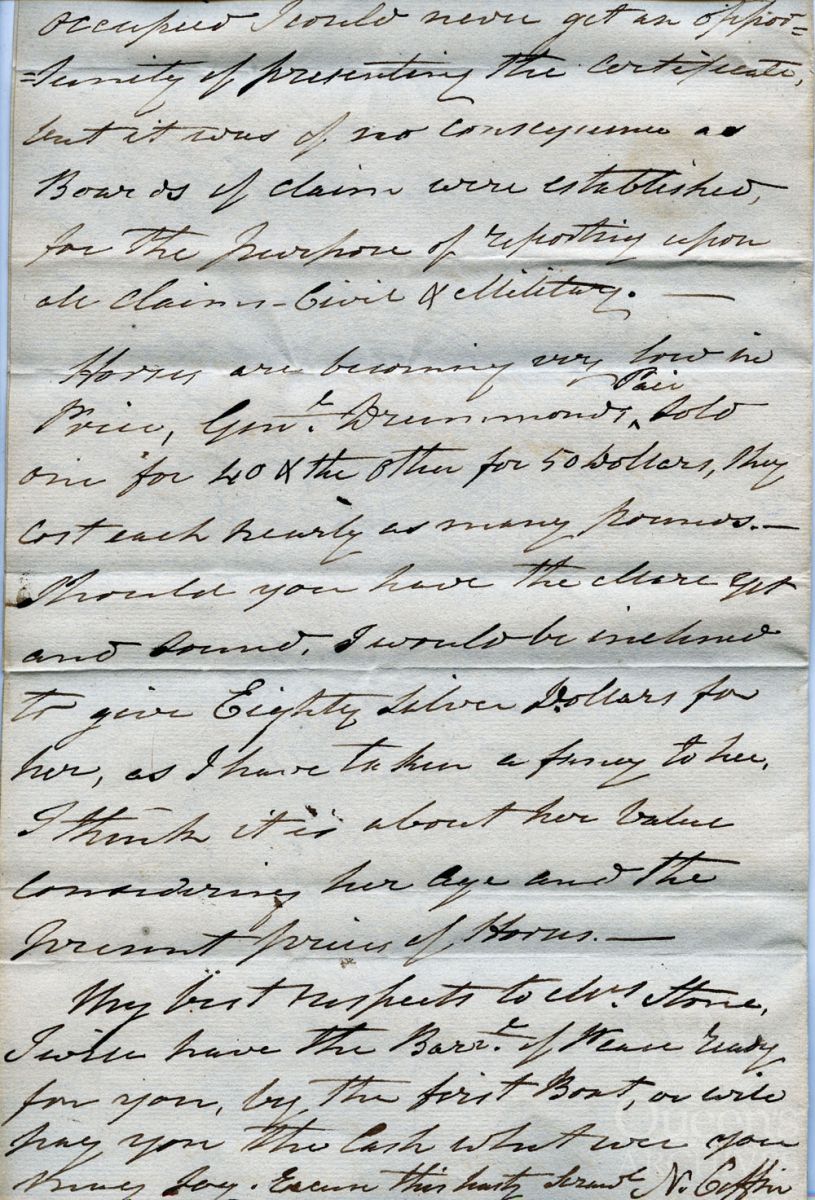 On April 15, 1815, Stone writes to Colonel Coffin congratulating him on his promotion to General. 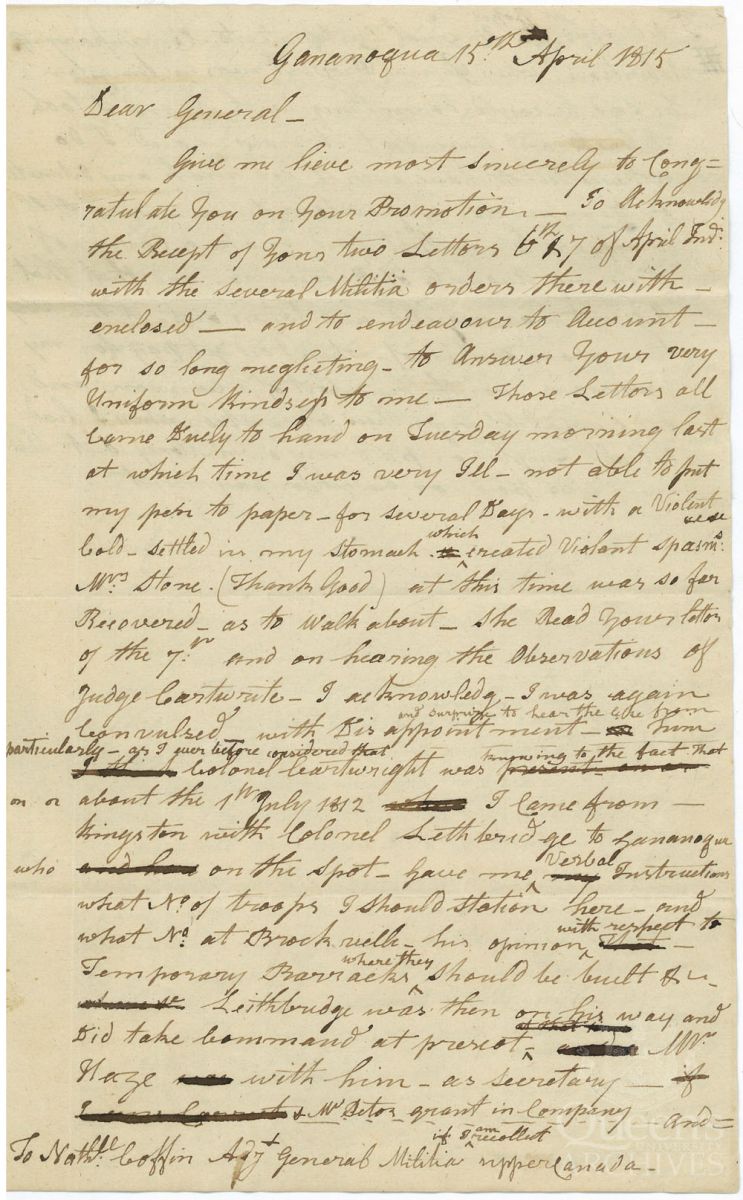 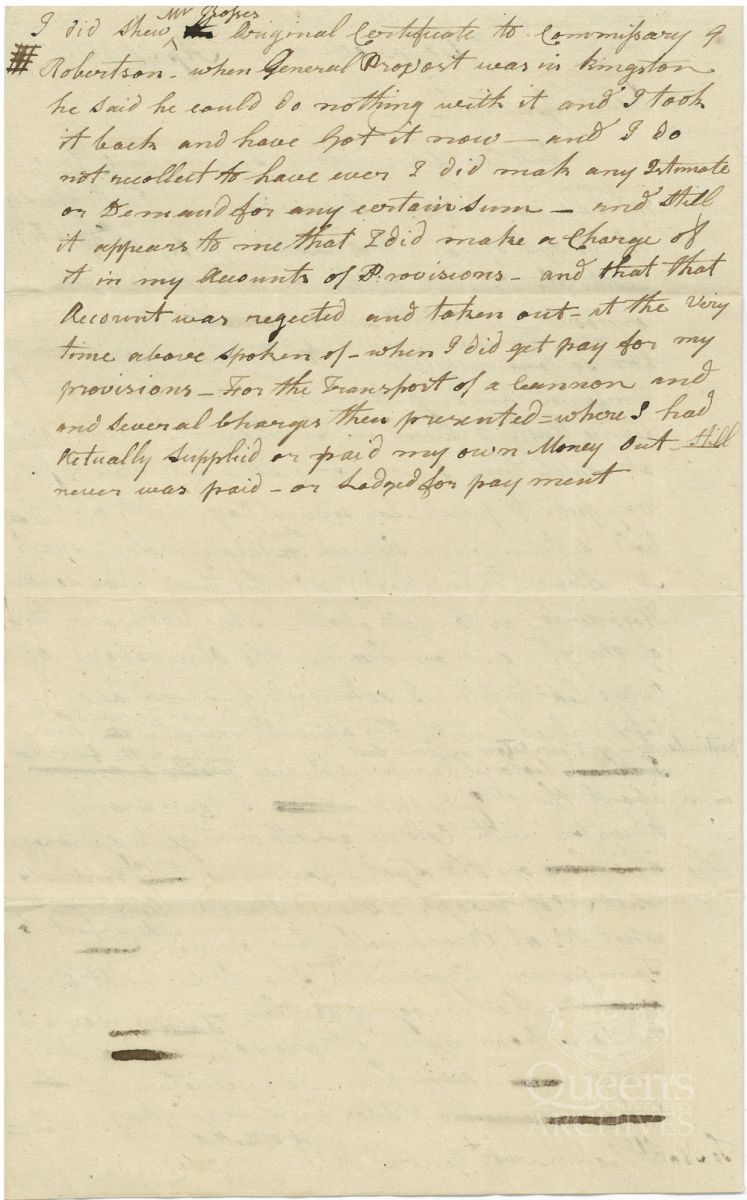 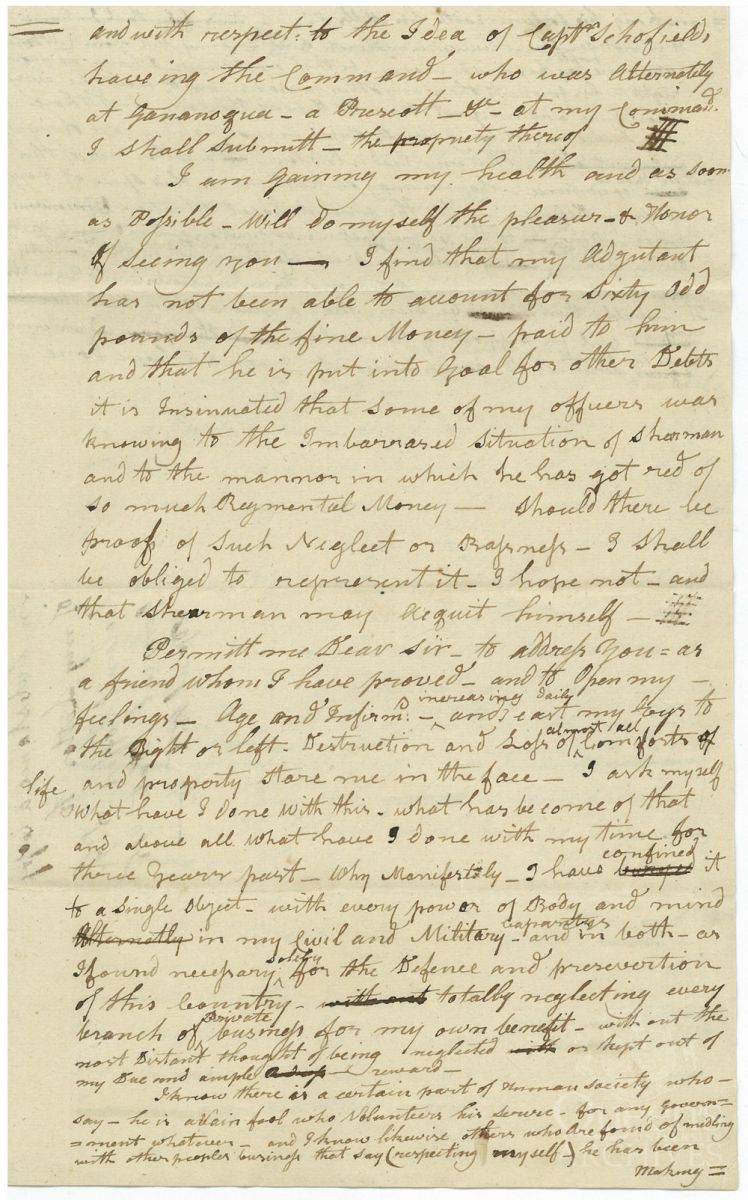 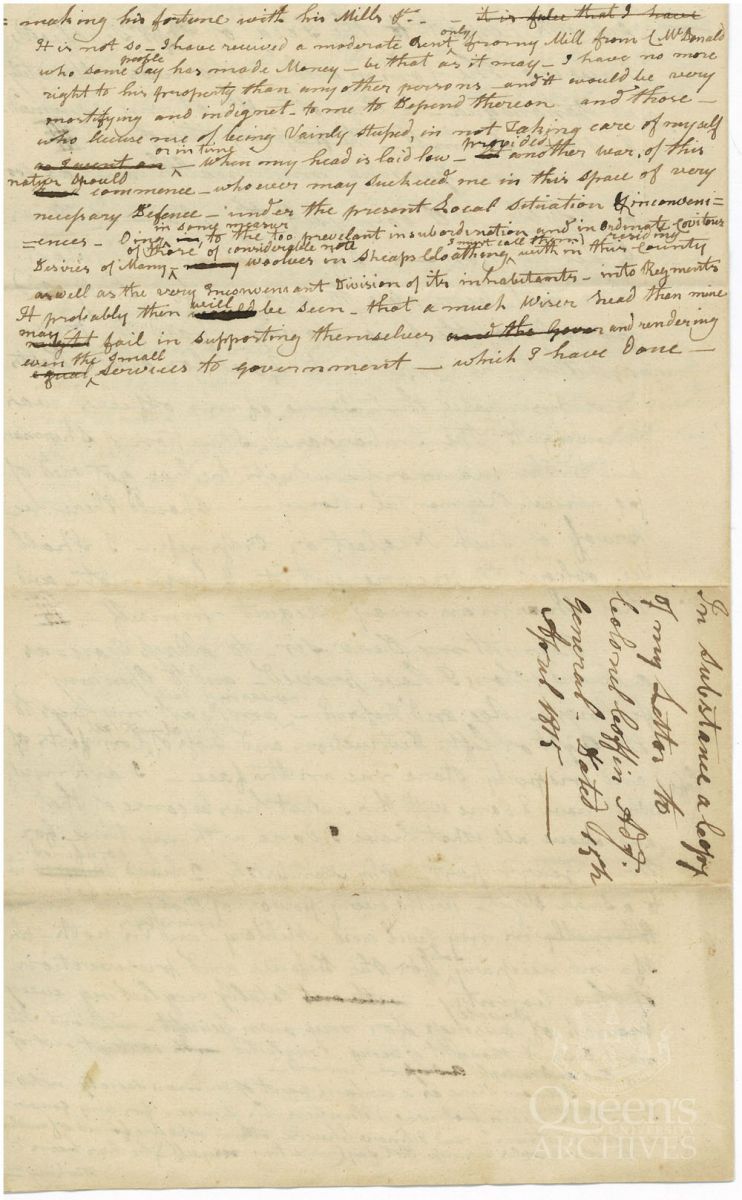 On March 31, 1816, Chas. Macdonald of Gananoque writes to John Macdonald of York about the duties to be places on all American goods.

Knowing you to have been acquainted with my father Samuel Stone of New-Milford and knowing on which side of the question he and his family were on the Revolutionary war, I Giles Stone was his youngest son and as you were the most particularly accounted with the family of any one I know of in this part of the country I wish you to write a line for me to show at Lead quarter as I make no doubt a line from under your hand would have great influence in ____________ me to draw my lands from government. I now reside in Percy in the district of New Castle and are in comfortable circumstances and good health and by favouring me with the above request you will much your friend and humble servant, Giles Stone.

on the subject of your obtaining Land in answer to which I will freely and openly acknowledge that no relation nor personal friendship not even an swore brother would endure me to use my influence to procure lands for any person whatever within his Majesty’s Dominion... Still I will cheerfully use my influence to that purpose for any and every person... who can prove themselves to... supported an active and spirited part in the Defence of this country during the late wanton and wicked war – waged against the Americans.

On November 6, 1826, Wm. Raymond of Niagara writes to Stone asking for a certificate to validate his experience as a surgeon during the war. 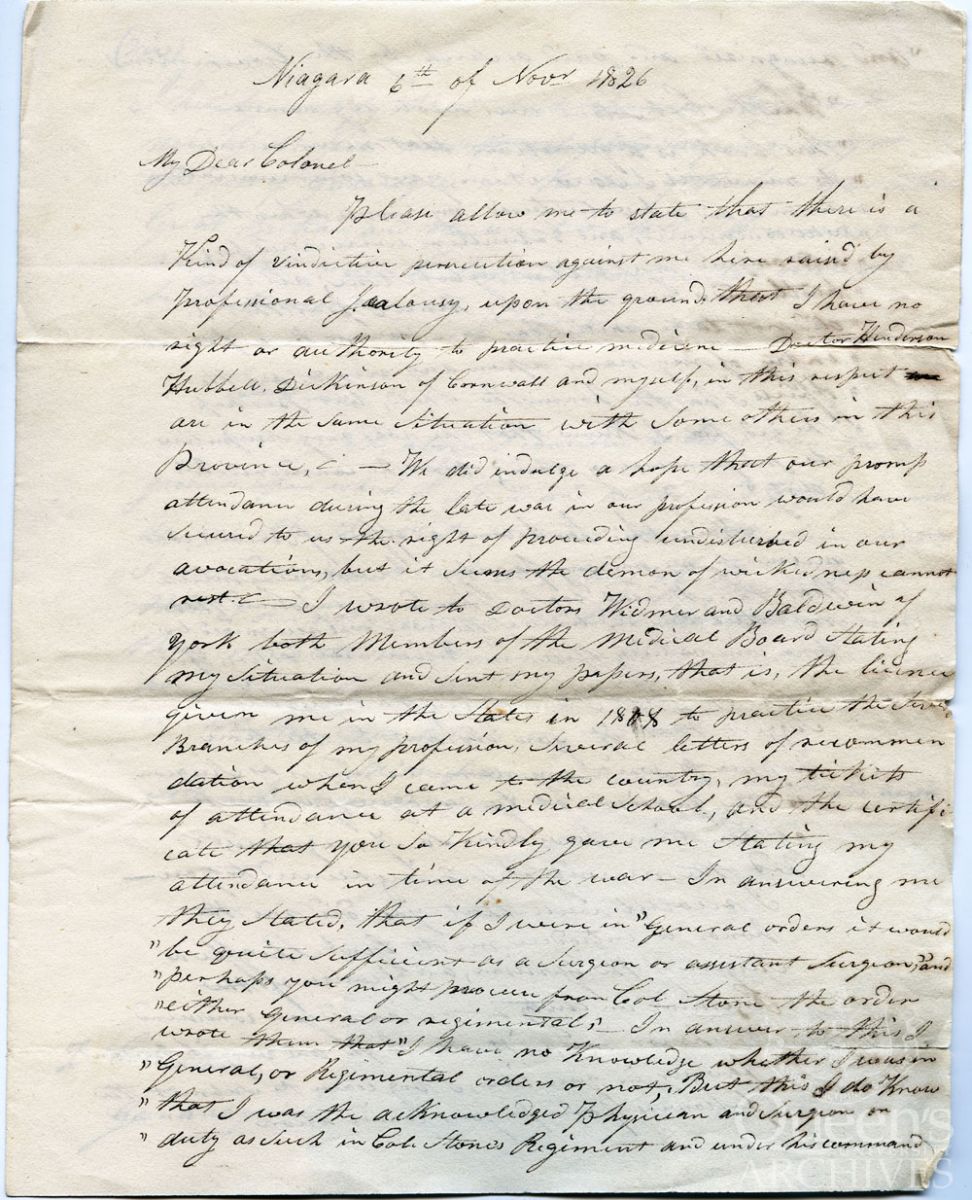 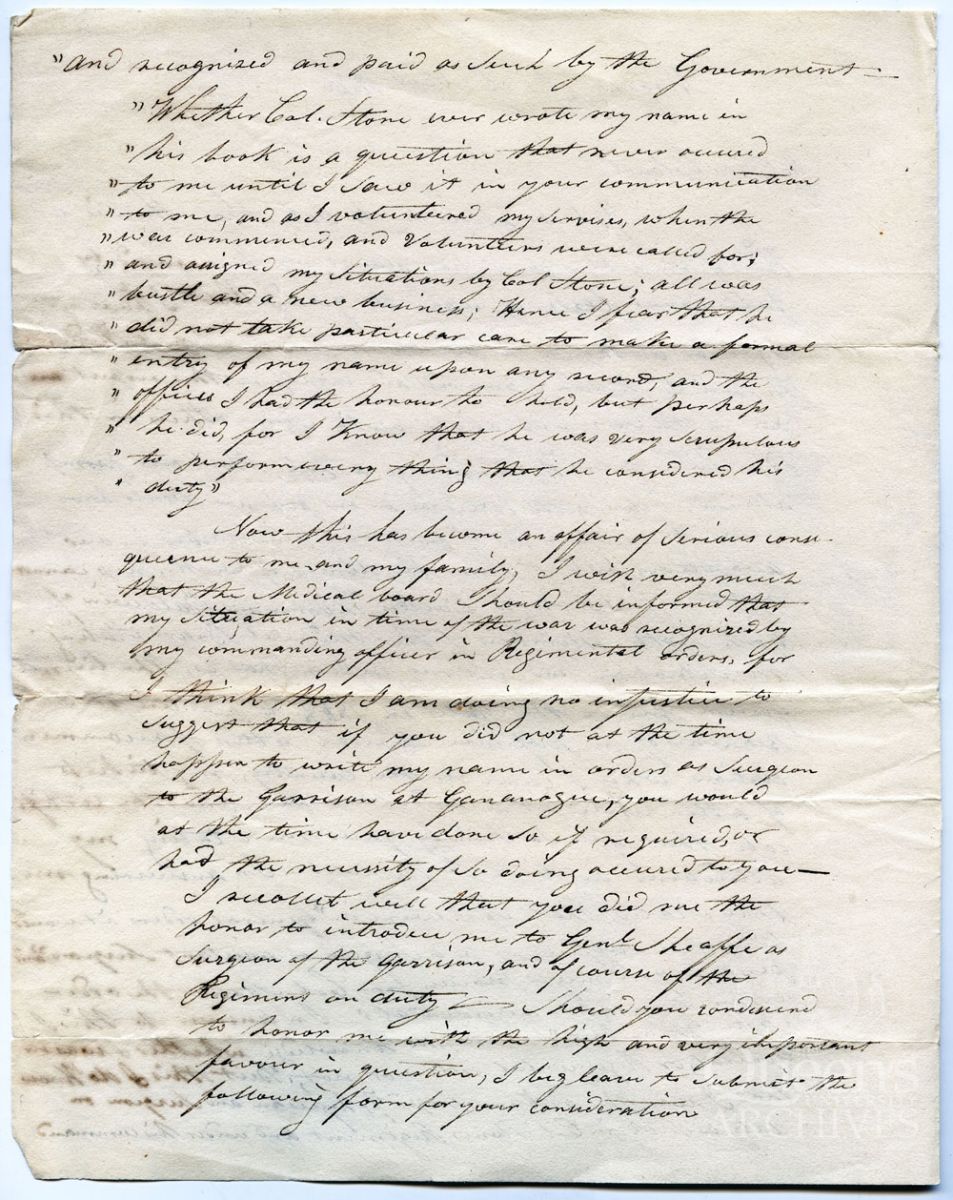 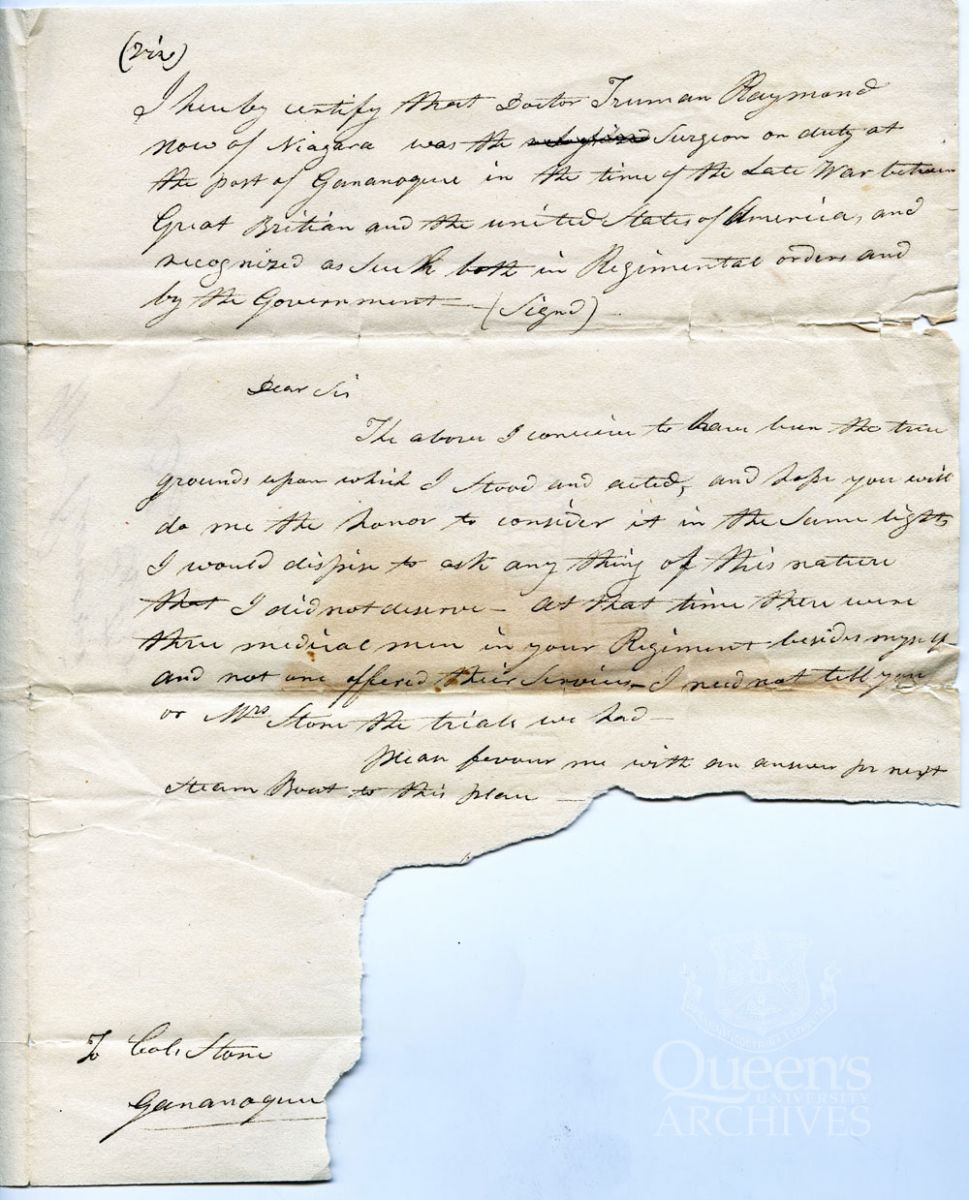 While Joel Stone recorded the events of the war through his correspondences, an unknown soldier maintained a detailed diary about his experiences between August 1813 and December 1814. Donated in 1956 by the former Queen’s University Librarian E.C. Kyte, the diary currently resides in Douglas Library.

Along with his comrades, the unnamed soldier was transferred to Canada from Europe to aid the Canadians in the fight against the Americans.

The following are excerpts from the diary transcribed by the Douglas Library, published in a pamphlet commemorating the war.

April 20, 1814: This day is peace come and we fired 21 guns and as the first gun fired I and J.K. had a bottle of brandy and a bottle of wine in our hands to drink a health to our absent relations and friends.

April 28, 1814: This day the town of Bayonne surrendered and we fired a salute with our great guns and the French fired their great guns in return as a compliment from the Citidal and town and battries where they had got guns in; and the inhabitants rejoyced much at the good news of peace and we gave three cheers for the United Powers of Europe

May 24, 1814: In the morning we struck our tents and marched to a camp 8 miles from Burdaux on a common... this is the randezvous for the English army where they all assembled. At this camp all things are very cheap both bread and wine. Wine is from 5 to 6 per bottle with which we make our selves as merry as we can and rejoyce thinking soon to see old England once again. But instead of England it was a far distant clime

June 4, 1814: We marched at 9 o’clock in the morning to Burdaux down to the river side and there had new canteens and haver sacks [?] given us which give us some suspision that wewere not comming to England and then we went on board the Doncaster No. 440. But we are still in hopes of going to England. We remaind in the River Garronne till the 15th, on the day set sail under seald orders and we still we are sailing for England.

June 19, 1814: The orders were opened and to our sorrow it was to assemble in the River St. Lawrence in North America... Hear I commence my 4 expidition on the 19th of June, Till this time we expect we were sailing for Old England but now we [go] further than ever to fight our enemies after our hardships in Spain and France and we are to assemble in the River St. Lawrence. But as it is so I hope we shall soon arive there for on board a ship is uncomfortable sitatuion...

August 16, 1814: We arived in Quebic harbour which I was very happy to see after our long and tiresome voyage and we remaind hear till the 19th.

August 19, 1814: This day wenet on board the steam boat. This boat will sail 15 mile in one hear with the wind and tide and it will go 4 mile against both wind and tide.

August 21, 1814: We arived at William Henry about sun set where we disembarked and went into barracks that night.

September 3, 1814: We took up our position at the entrenched camp wich the enemy had left without any opposition.

September 4, 1814: The whole of the left division advanced to a village by the name of Chazze [Chazy] without meeting with any opposition from the enemy and continued to march to Plattsburg.

September 8, 1814: We drove the enemy into town. Part of the 3d regt we ingaged and the whole of the piquets were ingaged very sharp and the first salute they gave us at our arival was an eighteen pound shot. Then we moved a little to the rear and began to make our selve huts and remaind there till the 11th.

September 11, 1814: In the morning our shipping were seen to be on the move. We then that part of the army under Major Genl Robinsons command consisting of the 3d battn of the 27th regt and 76 regt and 4 light companies; and the Major Genl Powers brigade consisting of the 3d 5th first and advance provided with scaling ladders to destroy the enemys works on the heights. This force was placed under the command of Major Genl Robinson. Scarcely had His Majestys troops forced a passage a cross the Saranac and ascended the heights on which stand the enemys works when we heard the shout of victory from the enemys works in consiquence of the British flag being lowered on board the Confiance and Linnett and the gun boats seeking for safty in flight. Hear we found the enemy in the occupation of an ellavated ridge of land on the south side of the Saranac crowned with three strong redoubts and other field works and block houses armed with heavy ordinance; with the flotilla (Saratoga 26 guns Surprise 20 guns Thunder 16 guns Preble 7 guns 10 guns boats 14 guns) at anchor out of guns shot from the shore. This day we retreated a cross the Saranac again as our force was not strong enough. Our batteries were ordered to be dismaned the guns withdrawn and the baggage with the wounded men who can be removed to be sent to the rear in order that the troops may be sent to Chazze to morrow and the following day to Champlain where I surpose to make a halt until we shall see what the enemy mean to do of the naval ascendency they have gained on Lake Champlain. This has been very fatiguing for we had no roads but we had to cross fields and woods. This day we lost 4 officers 2 sgts 1 dr[ummer] 26 rank and file 1 capt killed and 3 officers taken prisoners of war.

September 12, 1814: Marched to Chazze and from thence Champlain where we halted all njght. The roads is very bad and the march is fatiguing.

September 14-23, 1814: To Lapriea [La Prairie] and there we went into barracks and remaind there until the 23rd and then marched to Chambly.

October 23, 1814: This day the men whose times are expired are allowed another bounty who wish to reinlist again.

November 31, 1814 (sic): This day we were supplied with winter gloves [and] tippets to keep the frost from our ears as the weather at this time is very sharp.

December 1, 1814: Began to ear our great coats on parade on account of the sharpness of weather. From this day to the 8 sharp frosts.

December 9, 1814: This day Corpl Arnold of the 76th regt was drownded as he was fetching some water from the river. From this to the 13th sharp frosts.

December 14, 1814: This day we received from head quarters the following orders for to be read to the men.

G[eneral] O[rders] The Commander of the Forces had received instructions from the Right [Hon.] Earl of Bathurst one of his Majestys principle Secretarys of State to announce to the troop serving under his command the gracious instructions of his Royal Highness the Prince Regent after the cessation hostilities in concequence of a definity treaty of peace to grant to a certain quantity of each regt in which number those who have families are to be first reckoned and who are disirious of settleing in Canadas: Grant of land not exceeding 100 acres to each person in eligible situation and those families are in Europe will be sent to them at the expence of the public. His Royal Highness has been further graciously pleased to signify his munificent instructions to continue for a certain period same issue of rashings and more over to supply empliments of husbandry either gratis or at a reduced price as the circumstances and nessisities of the settlers may require.