When war broke out in June 1812, Kingston was hardly prepared for the upcoming hostilities. While the British possessed only a few war ships, the Americans had selected Sackets Harbour for their navy command centre on Lake Ontario and began to build ships.

In response, the people of Kingston started to construct a series of blockhouses from Kingston to Montreal and established the town as a major source of supplies for the rest of Upper Canada. Major-General Sir Isaac Brock was also sent to Kingston, where he organized men for battle and reinforced local defences.

While numerous Canadians believed Kingston to be a plausible American target, the town did not witness many battles. However, on November 10, 1812, Kingston Harbour came under attack by an American squadron led by Commodore Isaac Chauncey.

Chauncey intended to destroy the Royal George, the strongest of British ships on Lake Ontario. Since the Americans possessed long-range firearms, Canadians, armed with short-range cannons, were forced to retreat. Nonetheless, both sides experienced little damage. 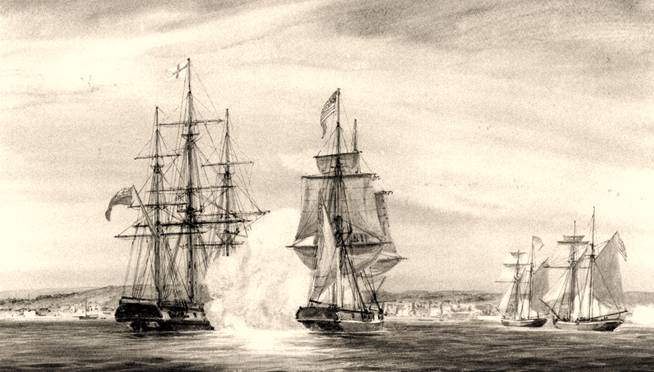 In time, the commodore and his fleet pursued the Royal George through the Upper Gap (between Amherst Island and the main shore) and into the Kingston Harbour. It was there at the harbour where the people of Kingston directly confronted the American enemies. Shots were exchanged between Americans and Kingstonians. Capturing two British schooners, the Americans eventually withdrew to Sackets Harbour.

On November 17, 1812, the Kingston Gazette reported on this historic event:

Early on Tuesday morning last information was conveyed to town that seven American vessels, full of men, were approaching. At day light the troops and militia were under arms, and detachments were immediately sent to occupy different avenues to the town in order to give the enemy a proper reception should they be disposed to land. - - The Flying Artillery were dispatched in advance of the troops. When they had passed Collin’s Bay, several shots were fired by our Gun Boat at the nearest vessels, which they returned, but without effect on either side...

About two o’clock they approached the town and were fired at from all our Batteries. They opened and kept up a brisk fire in their turn upon the Royal George and upon our Batteries, which was continued till after sun set, when the enemy hauled their wind and anchored under the four mile Point, having done no other mischief than killing one man on board the Royal George...

Ultimately, the Battle of Kingston Harbour remained Kingston’s only encounter with the Americans during the War of 1812. Indeed, Kingston was merely a town of defense, shipbuilding and supplies.

Kingston’s freedom from attack was the result not so much of these defenses as of the failure of the Americans to take up a vigorous and clearly planned offensive strategy in the face of the resolute delaying tactics followed by the British Commanders. (George Stanley, in A Short History of Kingston as Military and Naval Centre, page 13)

On May 29, 1813, the British attacked the American naval base, Sackets Harbour. Travelling from Kingston and across Lake Ontario, the British, led by Sir George Prevost and Sir James Yeo were determined to strike the Americans with a surprise attack.

However, Prevost hesitated and delayed the attack. Hesitation inevitably allowed Americans to send reinforcements from Fort Tompkins. By the time the British attacked, the Americans were prepared for battle. After three hours, both sides experienced heavy losses. Captain George Gray, commander of the British was killed, along with 259 British soldiers who were wounded, killed or missing.